Based on the "The Good, The Bad and the Ugly" rules of the wargame Club Schild & Vriend (see earlier posts) , made a Musketeer version.
Figthing as in the orriginal rule are done with dice from D4 up to D12.
Each figure has a basic die (e.g. D10 for dodging, D8 for scrim) for each ability, the higher the dice value, the stronger. Dice value can be modified depending the circumstances.
If the figure with initiative scores higher than oponent = wound.
Special characters can receive several wounds if not deadly. figurants are immediatly out of combat with one wound.

In our very first test game, Athos, Porthos and Armais are escorting a prisoner to the tower at the enterance of the town. Hired villains (figurants) trie to liberate him. Also the cardinals musketeer is leading them.
However. as we are three players each representing a musketeer. To win the game, the prisoner must be delivered  and preferably you must be the last musketeer standing, or at least be the one with the most kills and if that is not conclusive, the one with the most wounds.
Activation of the villains: each turn, one players can activate a D4 of villains.
He must make those activiated figures attack the other musketeers.
Of course those villains are of poor quality. 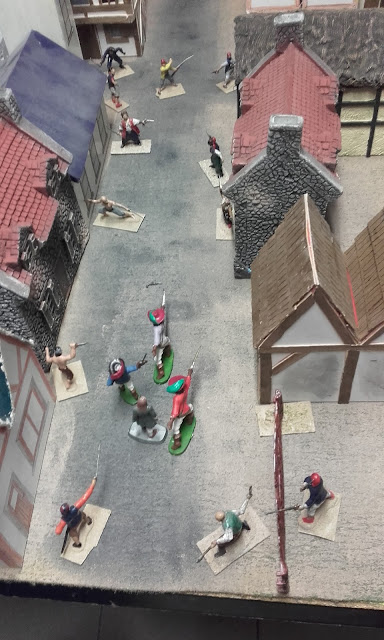 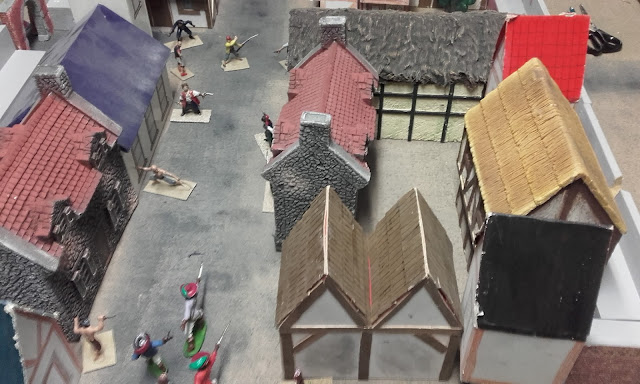 The initial moves went well.
However, it became clear the  villians quality was to poor.  Also, the initiative dicing did put the villians also in a disadvantage, meaning they could not score wounds.
After long discussion, two change were made:
1-activated villians move and battle first.
2-combat value of the villians was raised 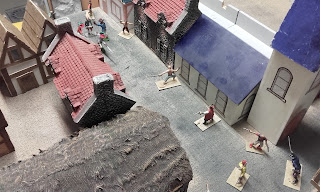 Now the villians did score wounds on the musketeers. 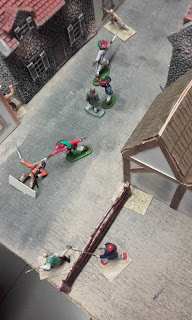 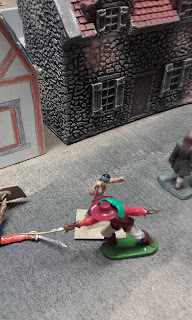 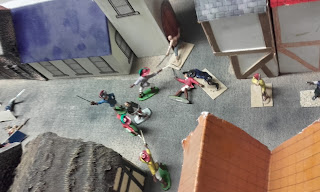 The kardinals musketeer also showed up, but Aramis shot him trough the head with a pistol picked up earlier. With their boss dead, after a final symbolic fight, they took to their heels.


It was a fun game, at tasted for more. So in the next weeks and months, more test will be done.

An final thing that must be made clearer, is what means atcivated.  If a villian is activated far away from the action, does he remains active. As it was the intentsion not to have a bookkeeping for the villians, how to keep track of number of reloads. 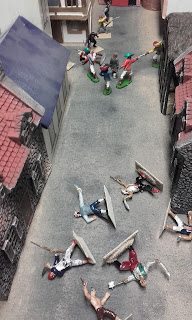 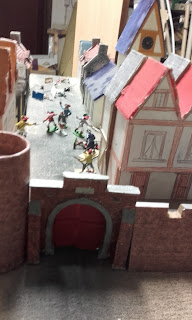 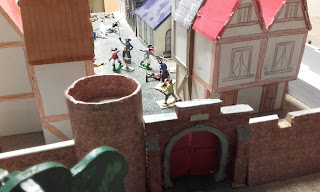 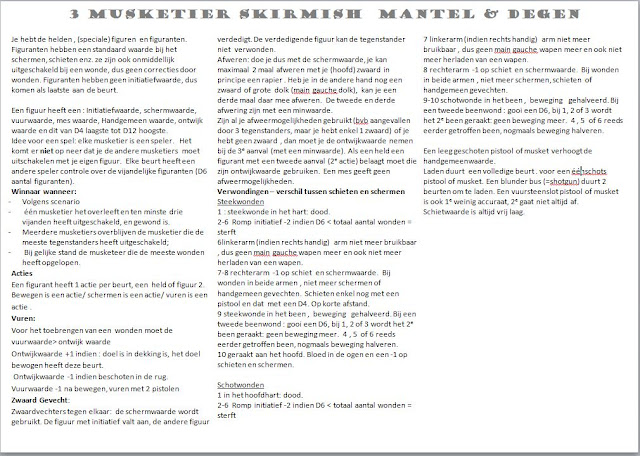 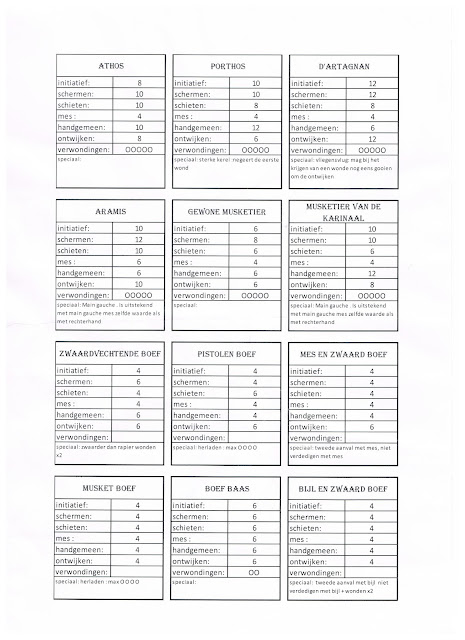 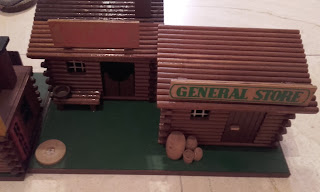 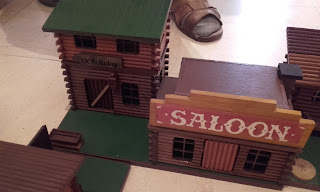 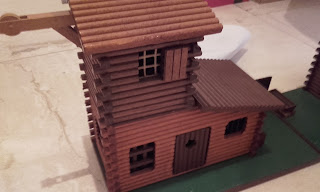 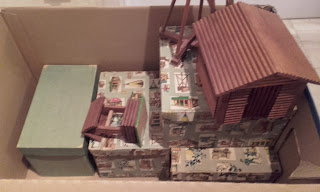 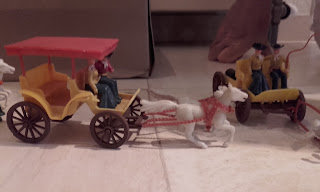 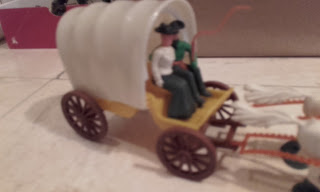 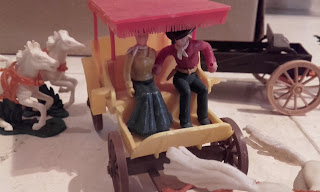 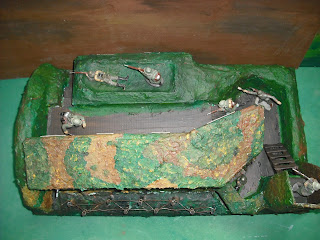 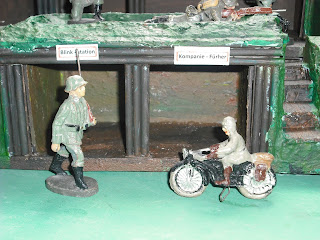 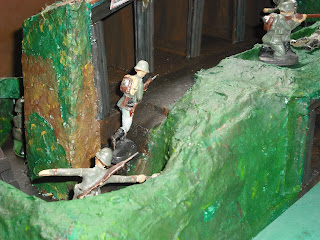 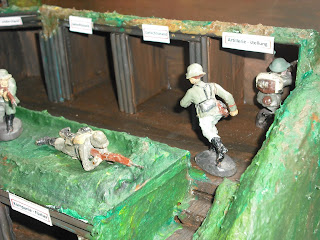 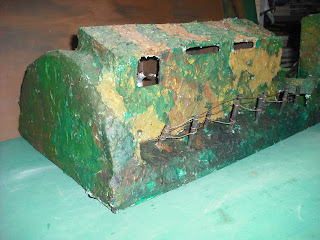 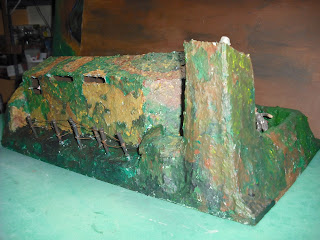 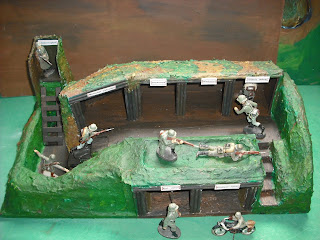