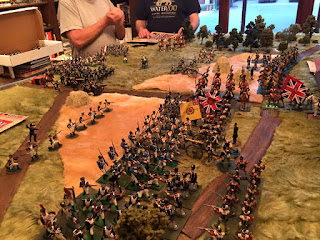 I ran my second "About Bonaparte" game in three days on June 16, 2015 at the home of Milton Soong. Since most of us live on the peninsula south of San Francisco, we call ourselves the Peninsula Gamers and we generally meet on Tuesdays after work. This week we planned special refreshments of Belgian beer and chocolate to celebrate the anniversary of Waterloo.

Due to the space required for 54mm figures, not all historic units were represented and some units, including the Brunswickers never made it onto the table. The game began with the troops of Holland and Nassau holding a thin line forward of the Quatre Bras crossroads. They had to hold back the more numerous French attackers until British and Allied reinforcements arrived. One thing I noticed as I set up was that "About Bonaparte" requires more mounted officers than I possess. So we had to make do with dismounted officers and generals, aside from Wellington and Ney for this game.

The French came on very aggressively and perhaps with too much coordination due to my lack of knowledge of the rules and the use of command dice. In any case, the French predictably pushed back the Dutch troops as well as Picton;s brigade on the British left flank. 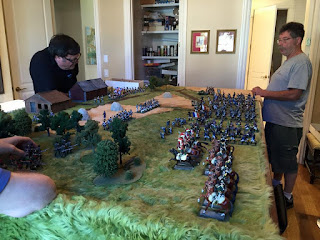 The French also pushed for 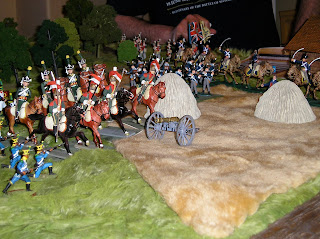 ward their light cavalry brigade with forced the Belgians into square formation. The Anglo-Allied forces received their first reinforcements of Dutch light cavalry (here represented by British Light Dragoons) which helped stabilize their right flank. Interestingly, the French chose not to contest the woods which saw much fighting historically. 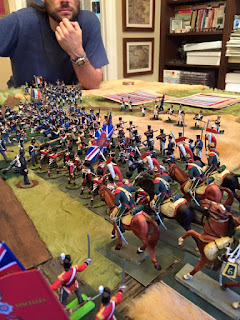 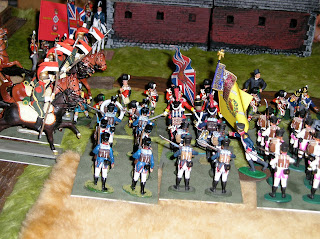 The French lancers were able to catch one Highland regiment before it could form square (as happened historically) and they broke and fled the field, leaving the Allied left in poor health.
Finally, the British Brigade of Guards arrived but, even with the road bonus for movement, they were slow in deploying. Meanwhile the remaining regiments of Pictons' division were hard pressed all along the line. 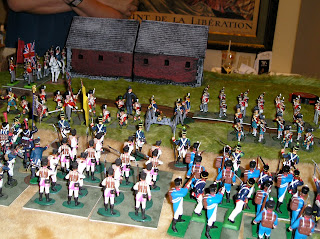 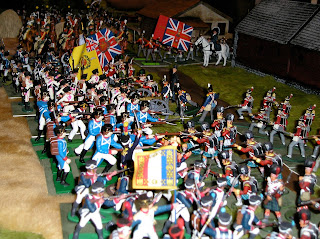 By this time, battle fatigue and the effects of the Belgian beer began to take effect and so we called the game in favor of the French, thinks to the French commanders acting with less caution than Ney did on the historic day. Over all the game played quickly and decisively and we look forward to playing another game, most likely set in Spain soon.

Close Encounters of the Worst Kind...

Proceeded by an article by Mr. Donvil on the impact and possible changes in case of a French victory at Waterloo (the Mont Saint-Jean) I can give a humble insight of taking part in those European reenactment events. Amongst them the yearly recreation of the final Napoleonic monster battle in nowadays Belgium.

INSIGHTS of REENACTING NAPOLEONIC HISTORY from NEARBY

No man could ever consider my joining a new born Napoleonic reenactment group would lead me to a position with responsibility over thirty-five persons in the battlefields around Waterloo in the year 2012, the thanksgiving two decennia after Napoleons' defeat in Russia. In fact, I never intended to.

How it began. Searching for an adventurous hobby to spend time with my son, we crossed the Napoleonic reenactment in 2006. A brand new group just started off, representing the 3rd Regiment of grenadiers on foot of the French Imperial Guard. This was a former Dutch unit, lifeguards of King Louis Bonaparte of the newly formed Kingdom of Holland the former Batavian Republic. We both subscribed to be the MEM (minimal essential musicians). 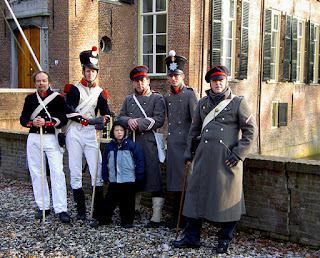 Our first meetings and drills took place around historical public places such as village-parks or minor castles. Since none of us carried a musket, sabre or even a bajonet, we could do this without any government permit. The lack of proper uniforms made us look like early 19th century trash. A mixed up collection of regular French and Napoleonic Dutch uniform pieces, leatherwork and utensils. Above: the first photograph taken of the maiden initiative in front of the townhall of Neerrijnen (NL) in Nov. 2006. Author (white gaiters) and his son (eight years of age) in the middle.

The potent initiative. Within two to three years the group grew up to be a player of eminence in the Western-European Napoleonic reenactment world and a truely serious one, in the Benelux. Around 2009 and 2010 the initiative was hired about a dozen times in relation to the 200 years remembrance of the installation of King Louis Bonaparte in the Kingdom of Holland. It proved the air that really vitalised le troisième Régiment. Russia 1812 (200 years) became the new focus of things and the group willingly adapted as such.

Below: a realistic improvised shelter along the banks of an unknown Russian river stream. Mimicking  the Russian campaign and the desasterous flight from Moscow. (Hardenberg, Loozensche Linie, NL). 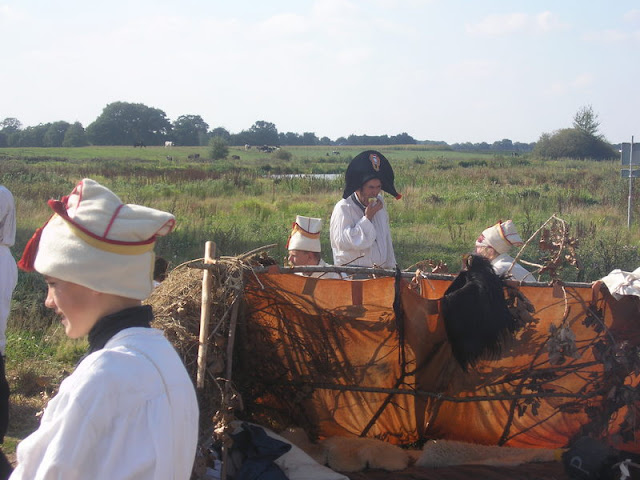 The stuff dreams are made of?

People who reenact history can have various reasons for that. It covers the whole spectrum in between men (and woman) who like to play (or really think) they are in charge and individuals that fancy to camp, in such historical relevant places, you normally are not aloud to put your bicycle against a tree trunk. Leading to the conclusion not all like to fire a musket on regular basis. Most of the time these weapons are antique originals, read: quite expensive! As is the uniform coat of a French Napoleonic uniform: in this case the 'Habit Longue'. The popularity of reenacting the American Civil War in the US makes the ACW period much cheaper, as uniform pieces, leather belting and other accouterments from this period are reproduced in high quality and vast numbers. Numerous country- and unit variation divides the European Napoleonic scene in small fragments, making it a dear investment to seriously get involved in. 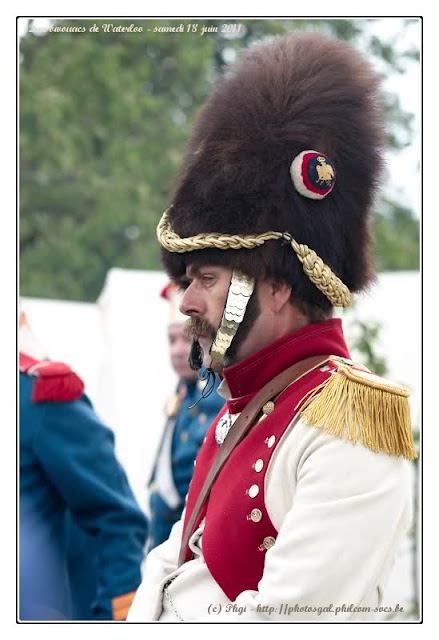 Waterloo 2011. A photopgraph picked up from the internet (google). Depicting the author as Capitaine of the Dutch Grenadiers (3rd Reg. foot Grenadiers of the Imp. Guard). In real, almost vanished to the last man during the retreat from Moskow (1812) but in full reenactment action every year in the re-fight at Waterloo. Youtube impression of this event can be seen here:

Underneath: In Dutch language an article by the hand of the author in the gaming magazine SPEL. Dating from 2008. Translated title: The awakening of a giant! (The French ,reenactment, army at Waterloo). 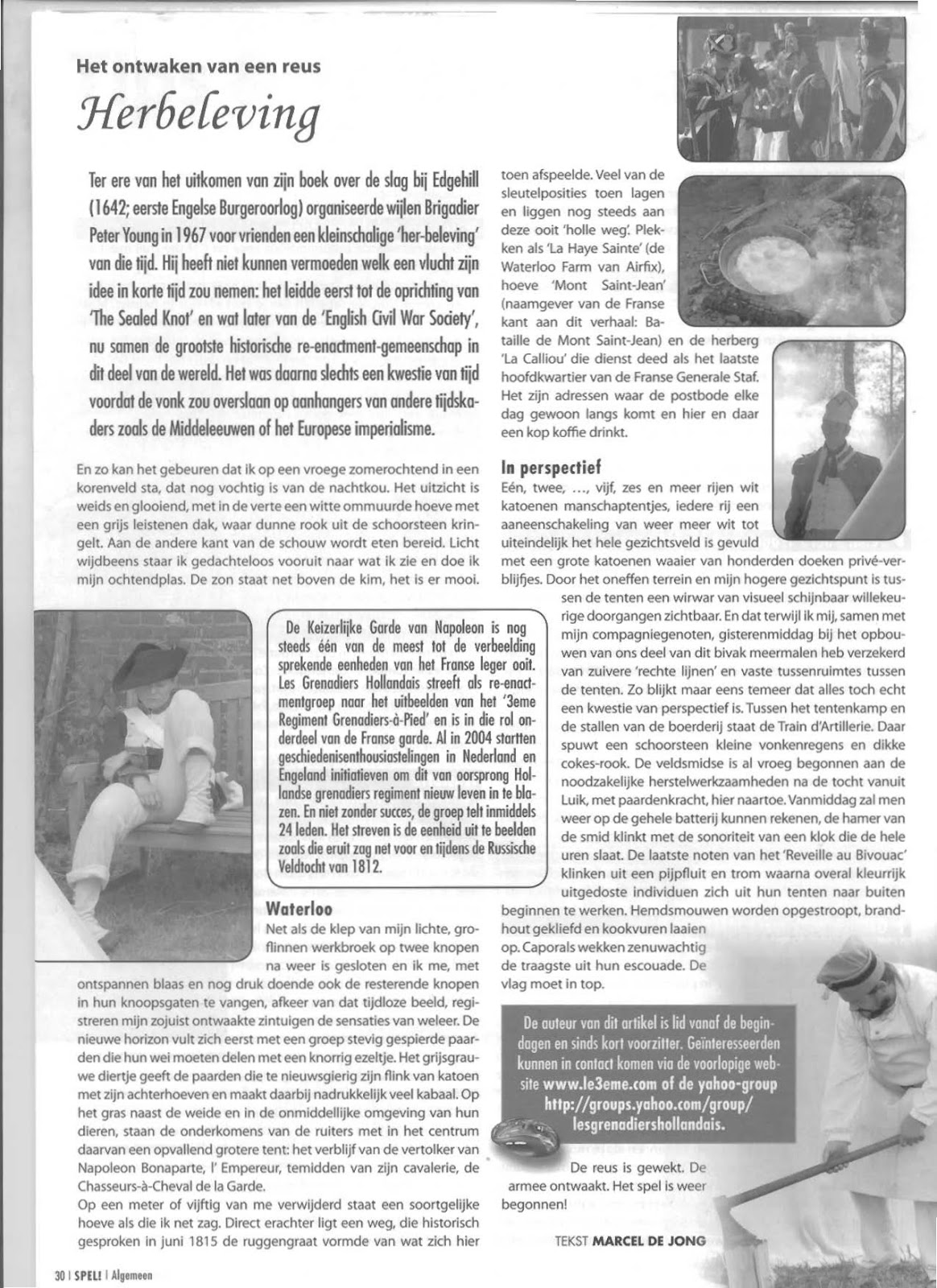 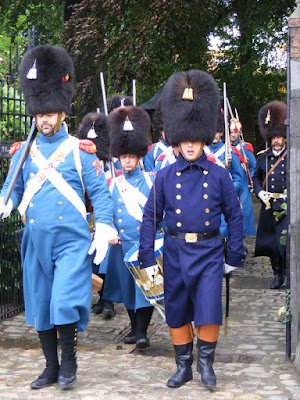 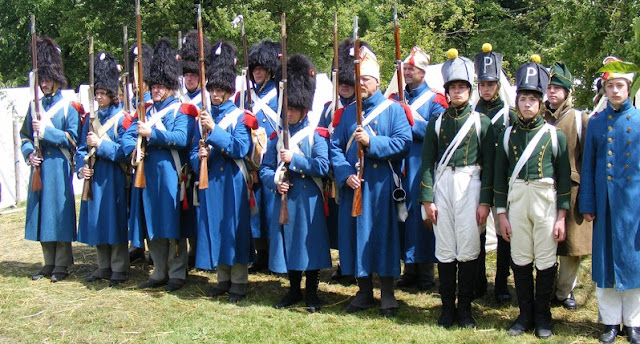 Grenadiers flanked by Young Guard, Pupilles de la Garde (right), all in campaign dress. Musicians and staff are in front of this and invisible in this photograph. (Orchard of 'Le Caillou' farm, original bivouac site of the Chasseurs a Pied and Grenadiers a Pied in 1815, the night before the battle).

Happy reading! I'm available for questions, suggestions or remarks. Happy toy soldiering to all in big and small! 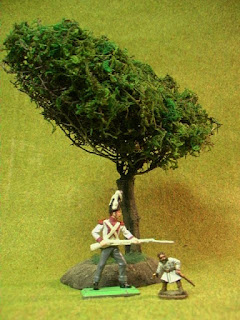 Before answering this question, let's look at what happened before.
When Napoleon invaded Russia, he indented to take Moscow which he presumed would have resulted in the surrender of the Tsar.

But for Tsar Alexander, Napoleon had become the Antichrist, and his divine mission  to defeat him.
The sac of Moscow didn't change the mind of Alexander, resulting into the catastrophic retreat of the French and allies.
The Tsar in his belief persuaded and pushed everyone into a anti-French coalition which ended into the campaign of 1814 and the fall of Paris.

With the common enemy gone, the negotiations afterwards turned into a hostile atmosphere.
Louis XVIII wasn't very popular and a major part of the population began to support a return of Napoleon.

Being married to the daughter of the Austrian Emperor,  and Austria at first being reluctant to join the Russian anti-Bonaparte coalition in 1812, Napoleon hoped  that with the negotiations  turning sour he could form an alliance, and return to power.  He made his move and returned to France.

But with their common enemy again on the field, the allies let go their quarrels and restored their coalition.  Tsar Alexander had no intention to drop his Divine goal to fight the anti-Christ.Also Napoleons wasn't the best  negotiator, almost all his victories ended with dictations.
He turned to the one thing he was good at. waging war.

However, he must have know his situation was hopeless.

Would Great-Britain be knocked out of the war with one big defeat? Don't think so, after 10 year of permanent war giving in after oone setback? Would the Dutch prefer a new French domination over Independence? No chance.
Did Prussia asked for peace after the defeat at Ligny? Of course not, they did receive several heavy blows in the 1814 campaign but had continued the war.
And above all, in the East, there was a massive force building up. 500.000 Russian, Austrians and other allies were gathering to start a new 1814 campaign.
As numbers do count, chances for Napoleon were zero.

let's also not forget the support he received from his coutnymen was also limited: the French were war-weary. Even berthier didn't return to service. He had to leave Davout, his best commander in Paris to cover his back, and kept turncoat Ney close.

So why is battle of Waterloo important? It certainly was the last battle of Napoleon, ending an era.  That is the big importance of the battle.

Did it change history? No, it shortened the  last convulsion of Bonaparte power. It can be compared to the battle of the Bulge in WWII. A desperate move with overoptimistic goals, but doomed to fail.
Of course, it also is the biggest battle the British fought against the french, and the only confrontation of Napoleon himself against a British dominated army.

In this Anlgo Saxon world,  the battle has received his mythical status. Made the Iron Duke the man who defeated Napoleon.  If one looks at the whole picture, one knows Tsar Alexander was Napoleons Nemesis.

Bringing your games to life are these amazing Volleyfire and Firepower lights. Simulating musket fire, flames and machine gun fire they’ll change the way your battle looks.
Have a look at this short video to find out more and see both the different lights in action.