On the second table of  our New Years game day, we staged a 1814 campaign battle. 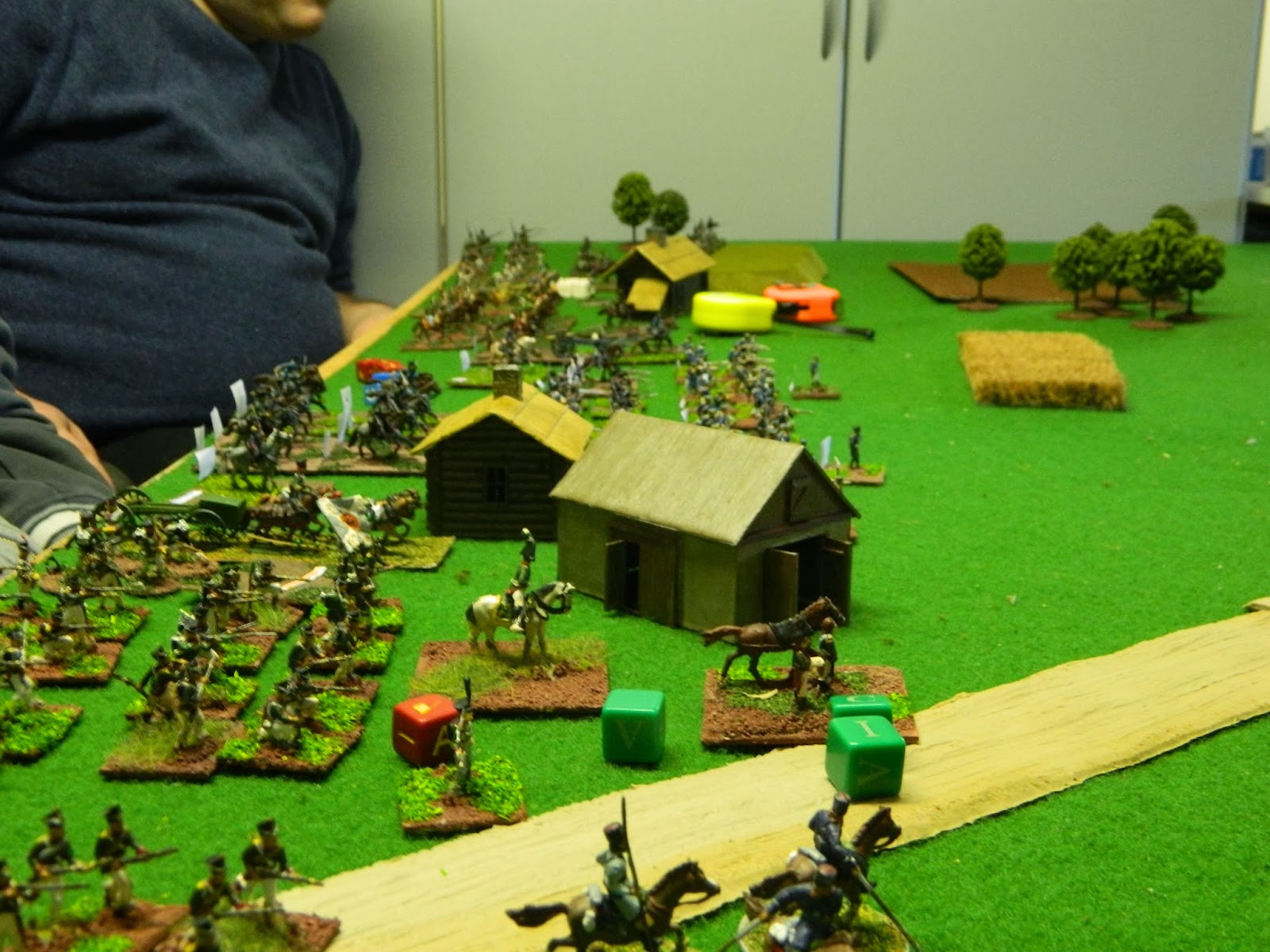 In 1814, France was loosing the war. Lost most of it's allies, it's resources exhausted, facing a huge coalition, and fighting on several fronts.  In the North of France, Napoleon Faced several armies of Prussians, Russians, Austrains, Swedes, etc..
Napoleon did win several battles, but couldn't afford the losses he took. As he couldn't be everyware at once, his subordinates lost some battles also. Outmaneuvered, Bonaparte lost the war when Paris fell.

Figures are from Geert
French players
Adrien on the left wing
Patrick Pots on the right
Allied players
Siegfried on the left, with the Austrians
Thomas in the centre with the Prussians
Kristof on the right with the Russian. 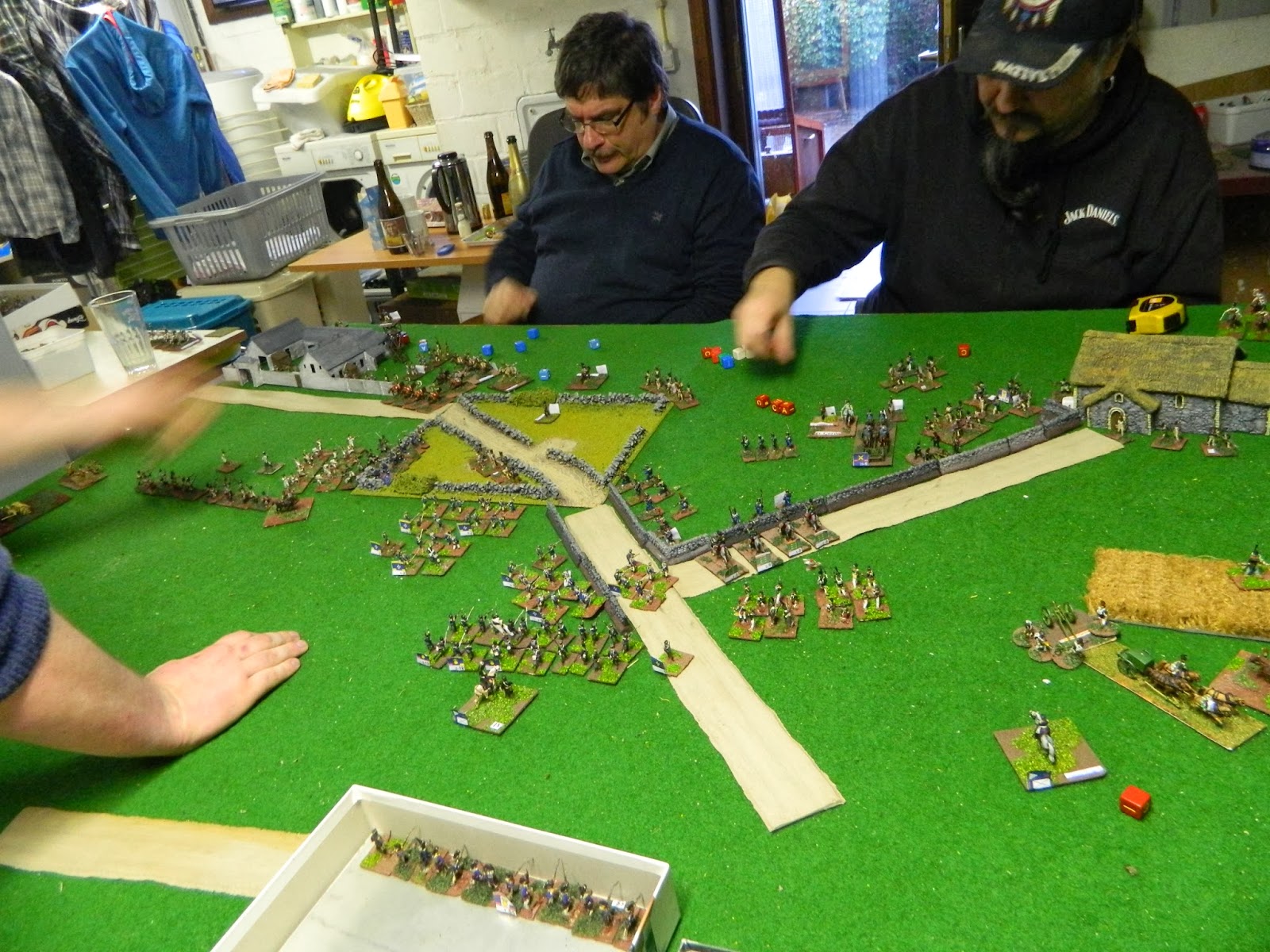 Every player had a mixture of infantry cavalry and artillery.
The French lost the battle.
In the center and right, the French had a strong position and resisted the attacks untill the finals turns.
On the French left, the Russian heavy cavalry defeated the dragoons and turned the French flank.
The infantry took position in squares, but with the Russian an Prussian infantry closing in, they were doomed. 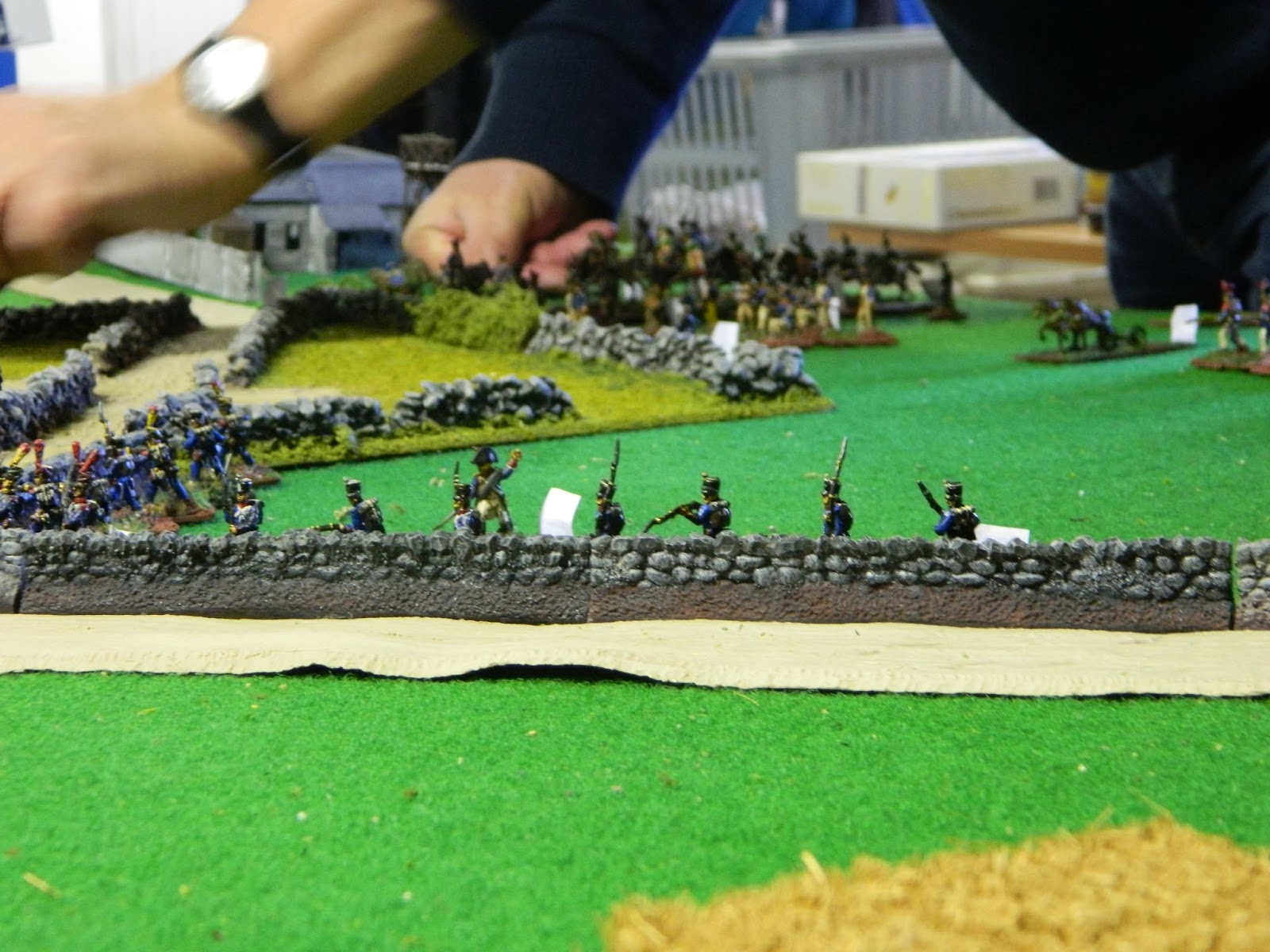 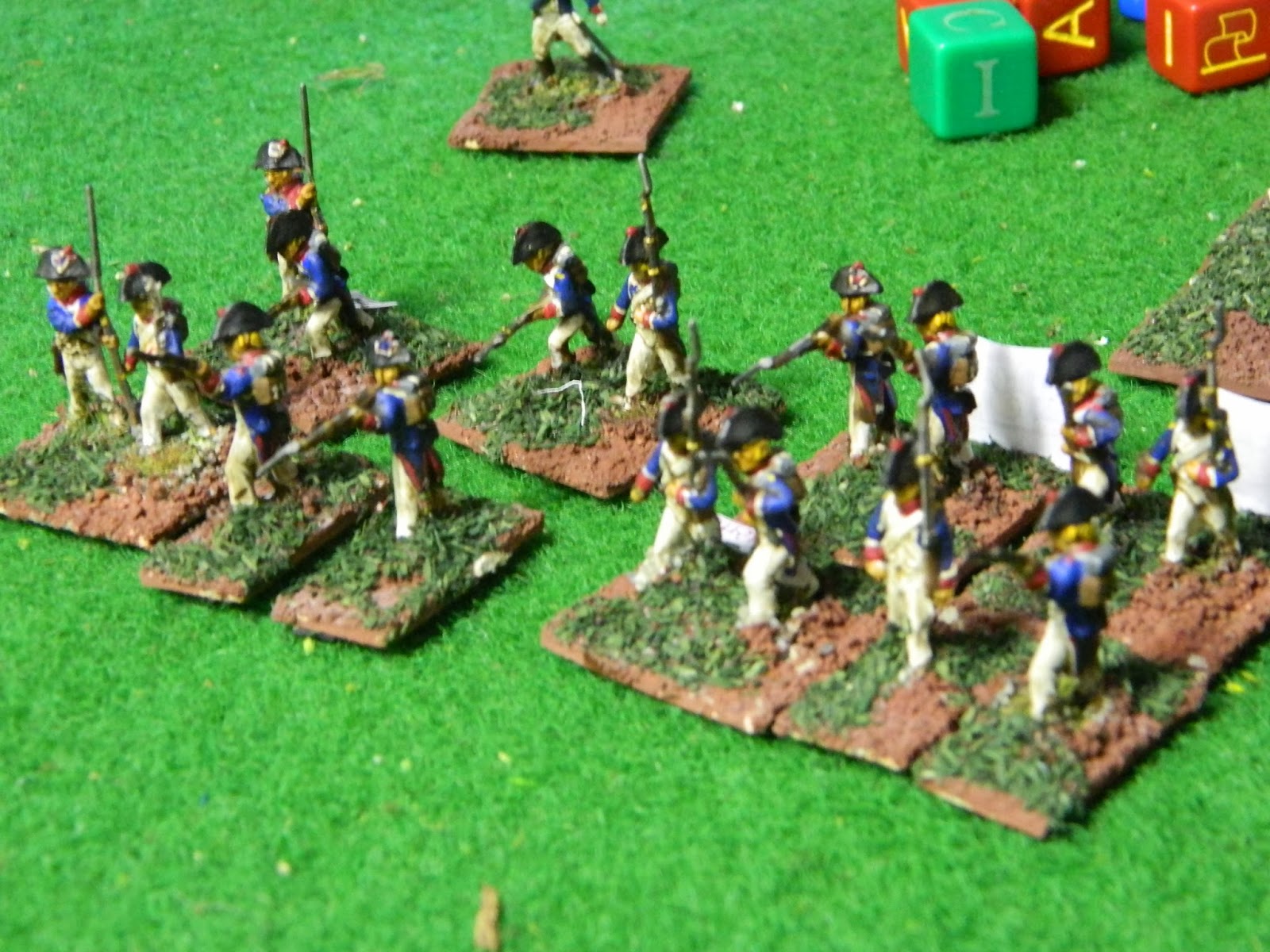 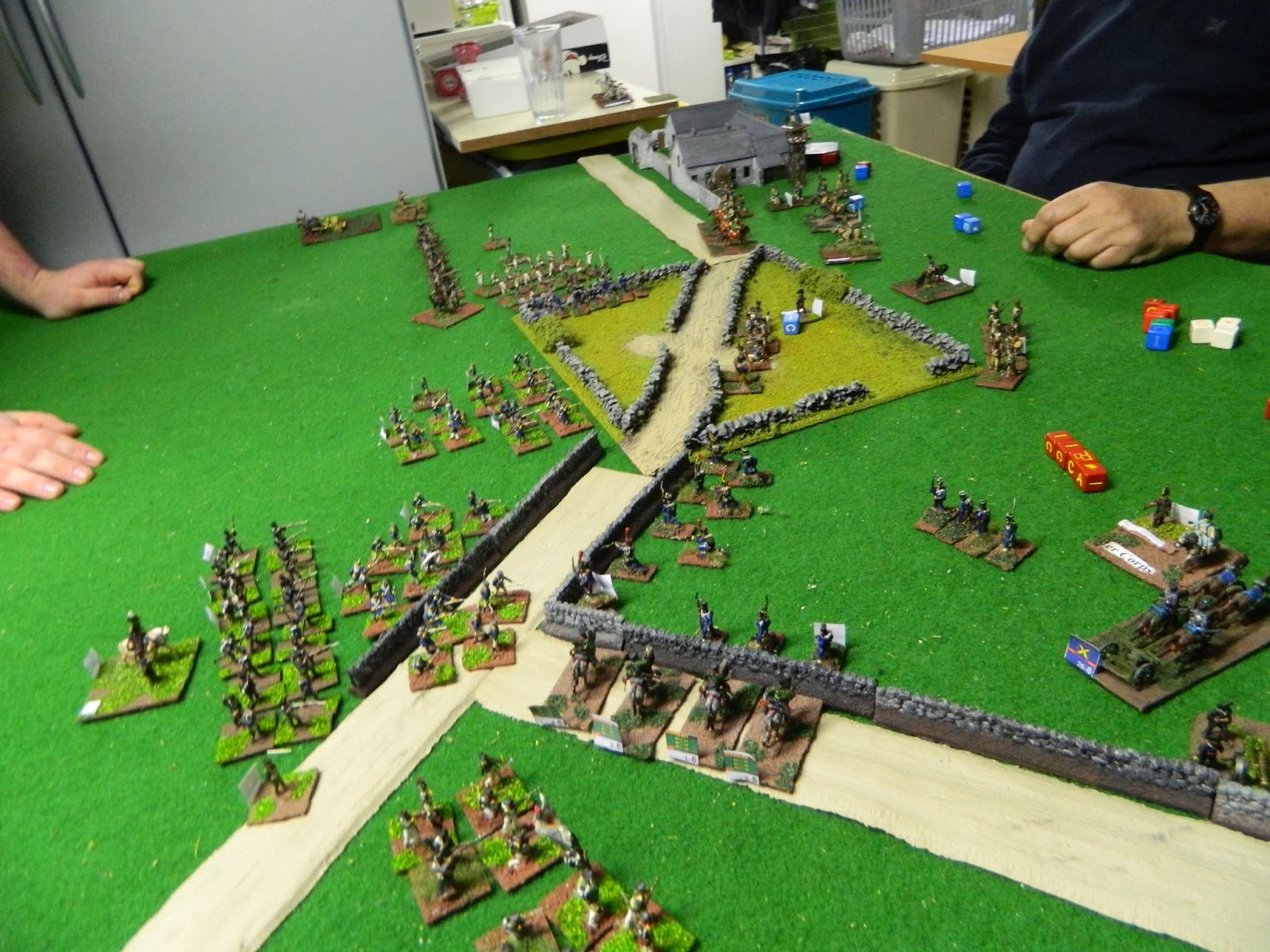 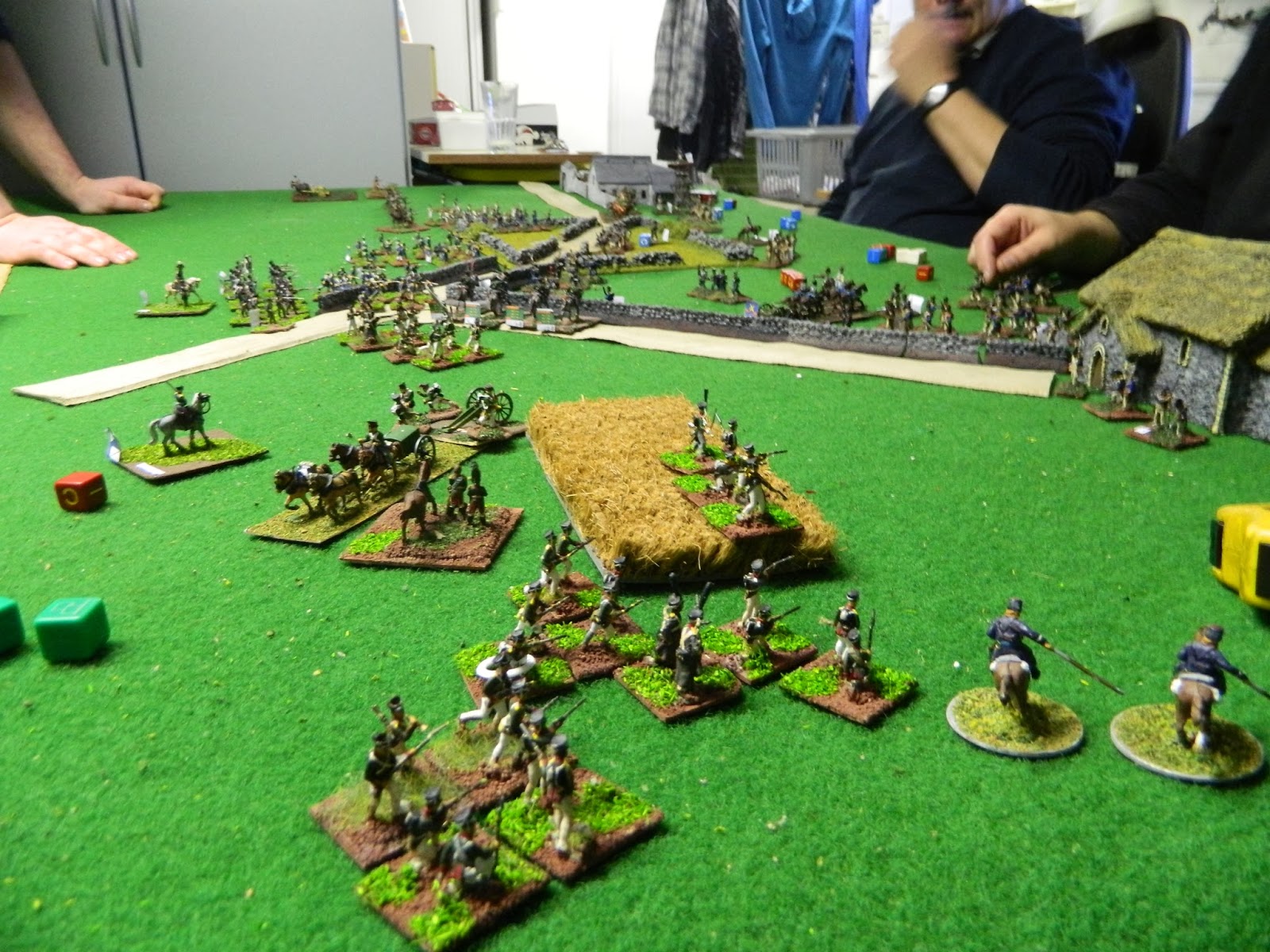 The French had lost Quebec after the battle of the Plains of Abraham in September 1759. 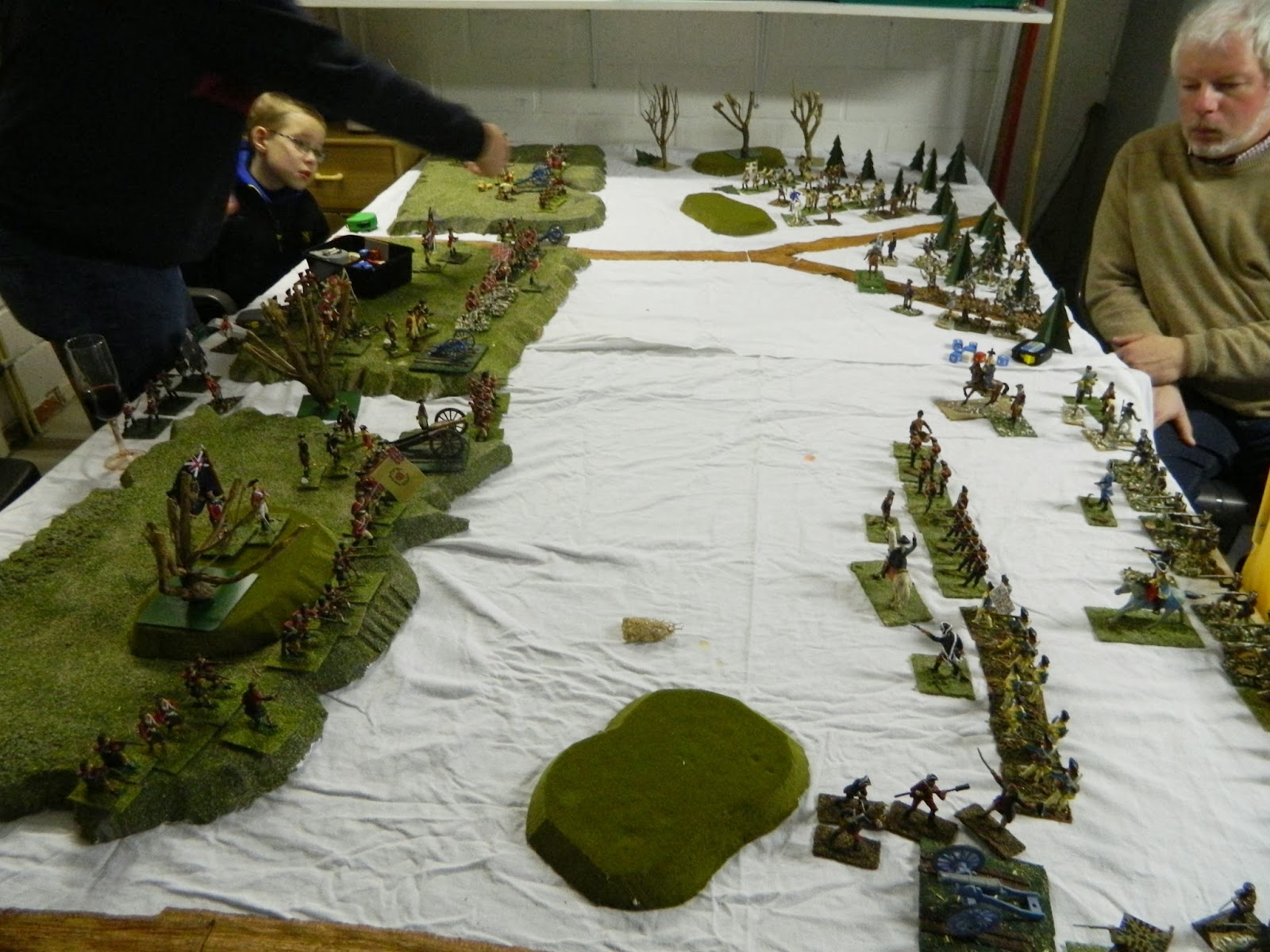 French commander-in-chief in North America, the chevalier de Lévis staged an expedition to retake the city before the arrival of the British fleet and reinforcements.
The British garrison at Quebec had suffered from winter, almost half of their effectives lost.
Colonel Murray British commander at Qeubec decided to confront the French force on the battlefield.
The battlefield was the same as for the battle of the plains of Abraham, making it a rematch, with the reversed roles.
The British battalions numbered less than 300 men each, 2 times 4 battalions in a brigade (Fraser/Burton)and two battalions in reserve. There were field 20 guns spread over the units. There were also two battalions of light infantry and a company of rangers. Totaling about 3.400 men.
The French had double that number, but with a major part consisting of militia and only a few field guns, divided into 5 brigades.
As it was early in the year, there was still snow on a great part of the field. 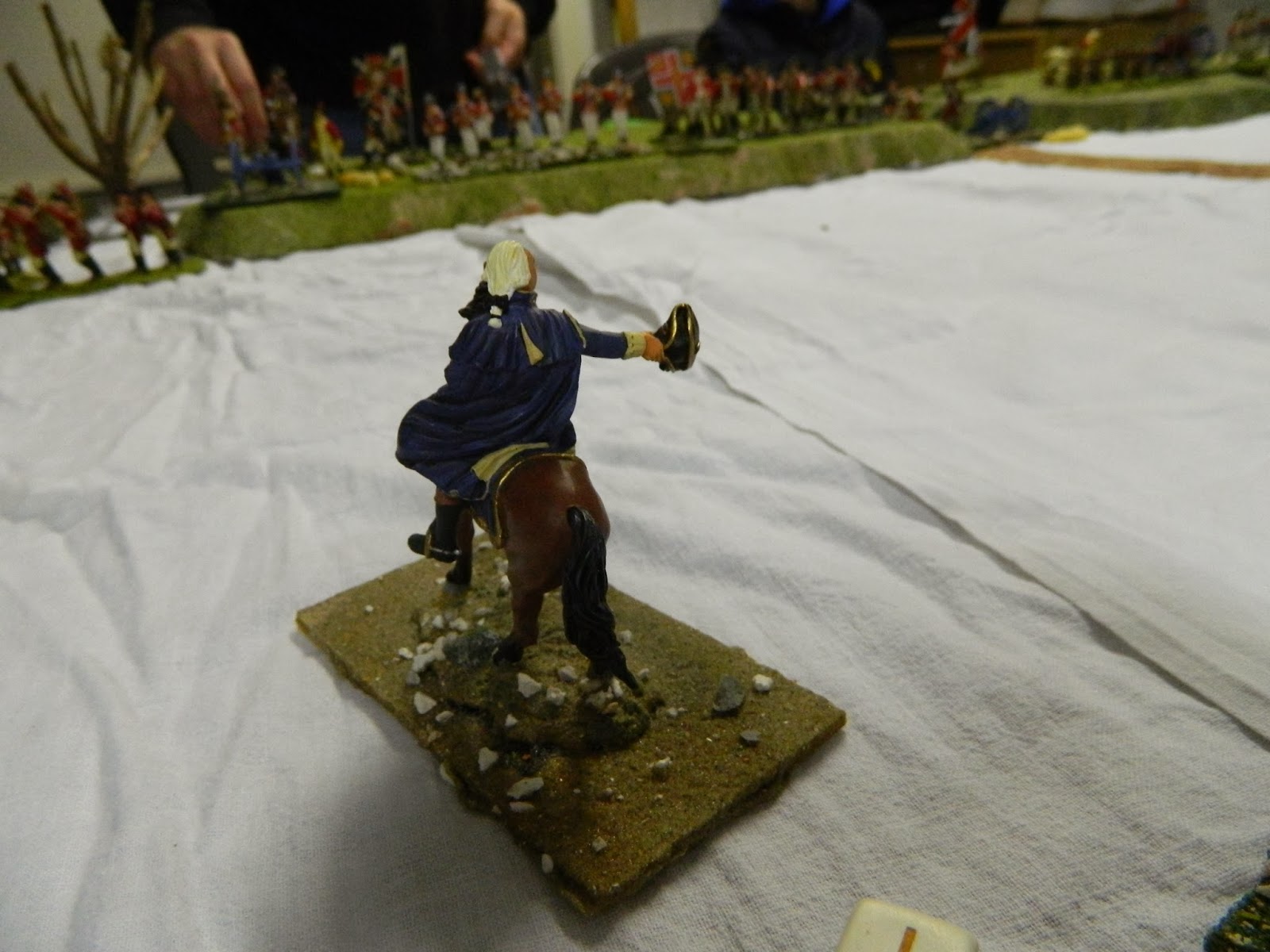 Playing the battle : We used "About Bonaparte" wargame rule .
The chevalier de Levis had send grenadiers to occupy the windmill and surroundings. The British light infantry is close to them. As al British battalions numbered less than 300 men, we gave them all 6 figures. The French numbered about 350 to 380 for the regulars, so we gave them 8 figures per battalion, except for the marine battalions that numbered about 500 men, so we raised their number to 11 and 12 figures. The militia units also numbered in average 270 men, so we gave them also 6 figures per unit. Al the British are veteran. In the French army, only the Marine units and the grenadier unit at the windmill are veterans. The British have 4 batteries, of which one is medium, the others are light. They have all just enough ammo to fire 4 turns, this due to the poor state of the roads limiting transport. The French have one light guns also with limited ammo.

Figures are from Steven 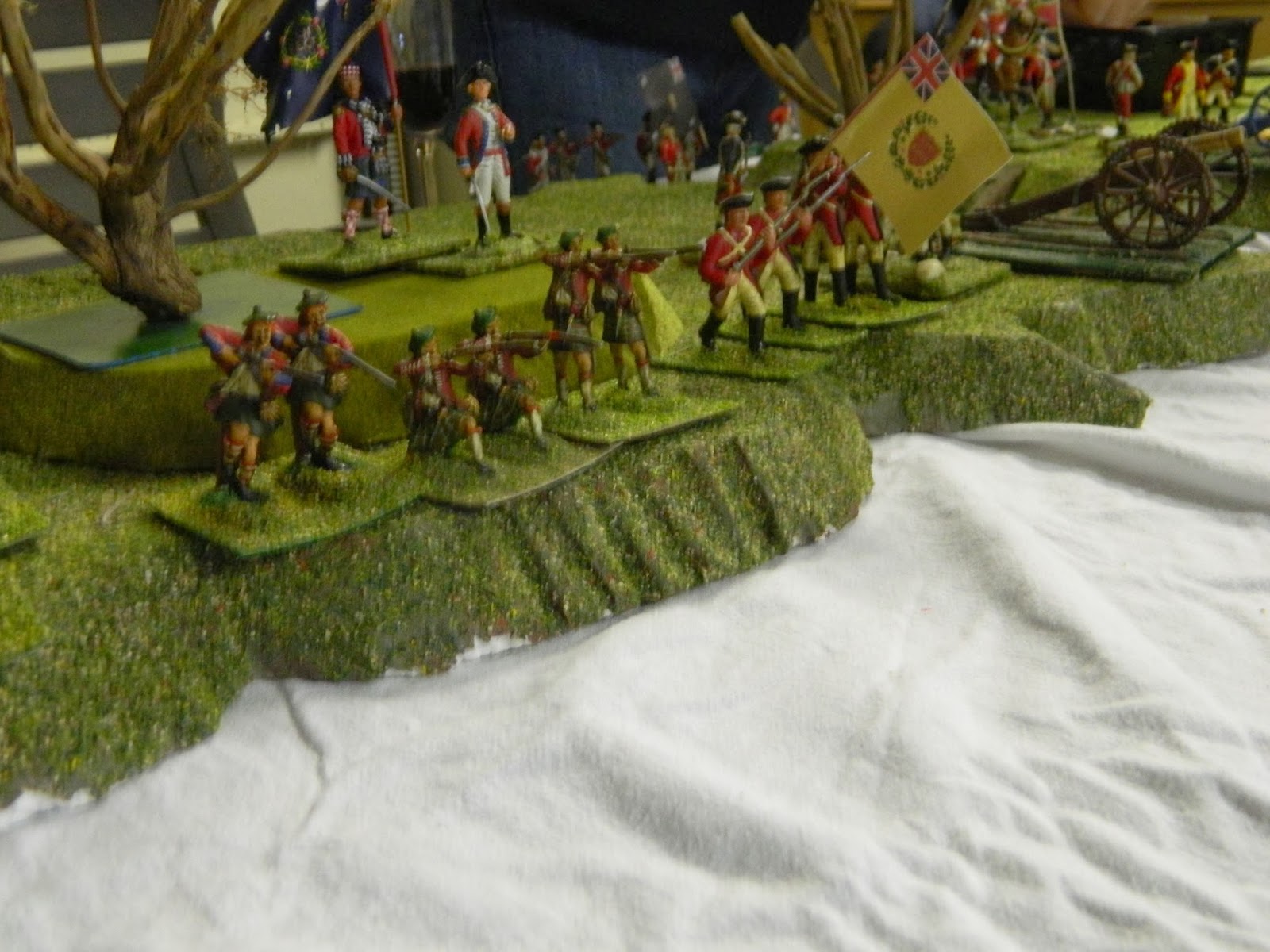 British order of battle for the game


French order of battle for the game 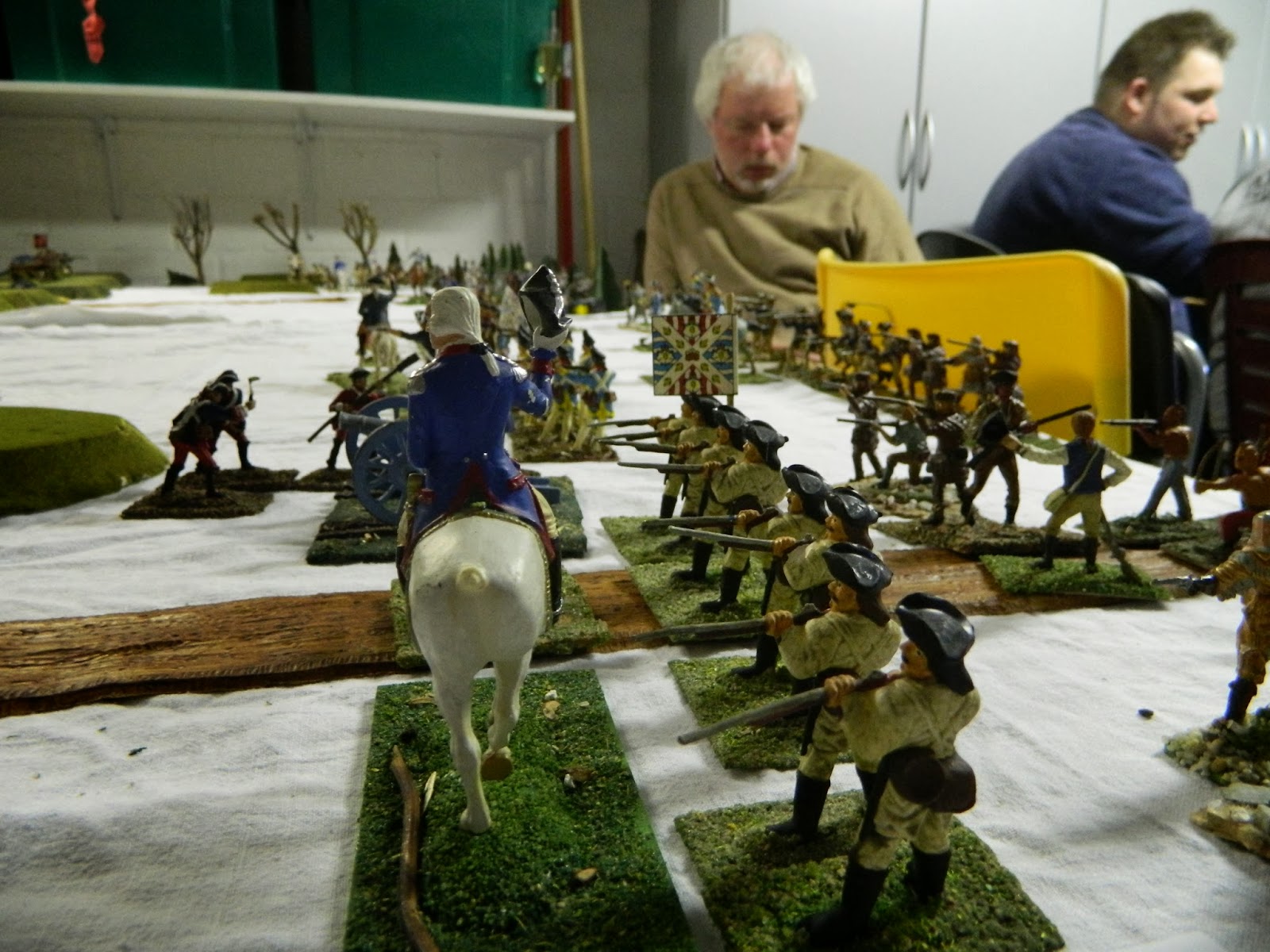 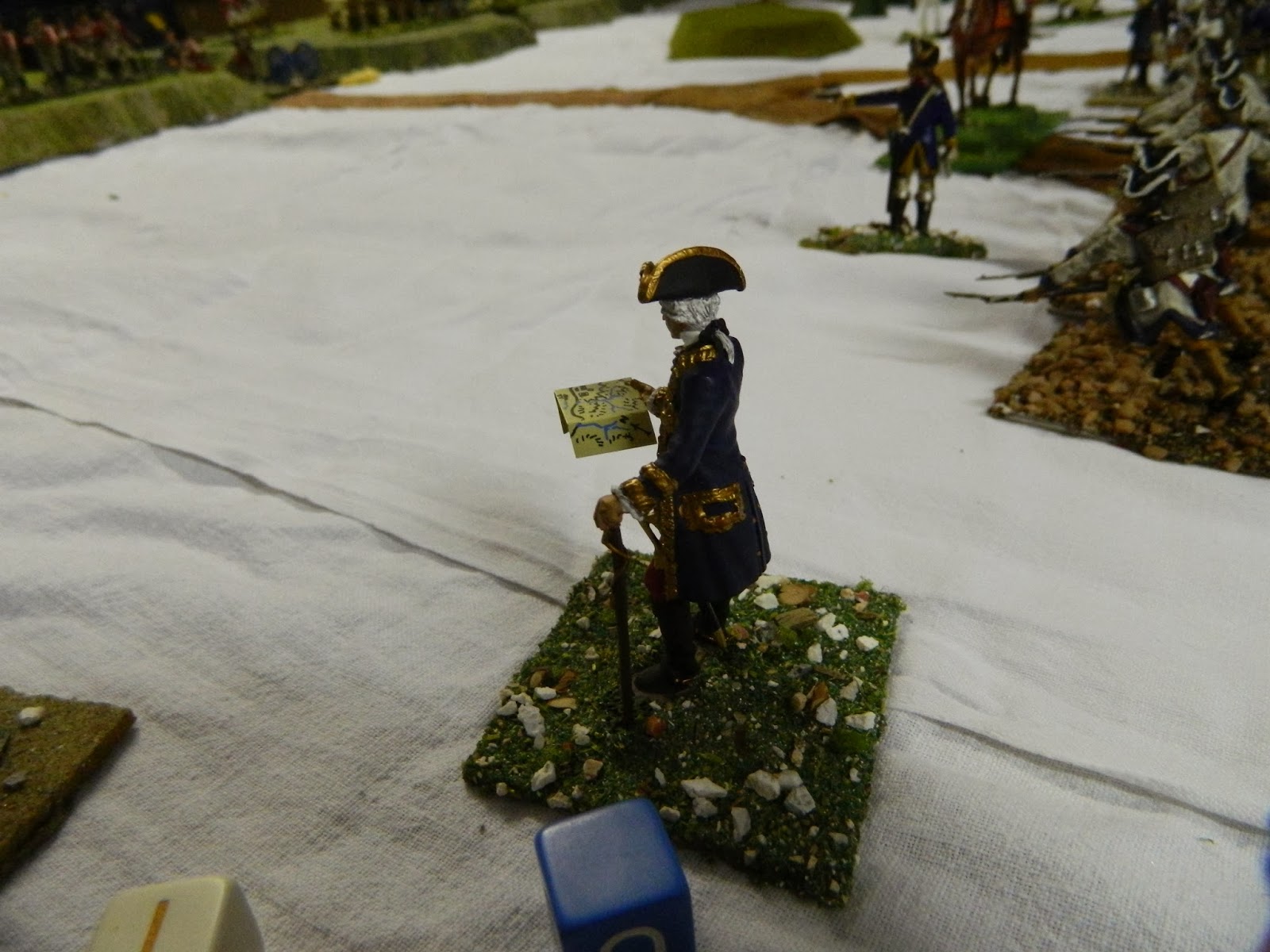 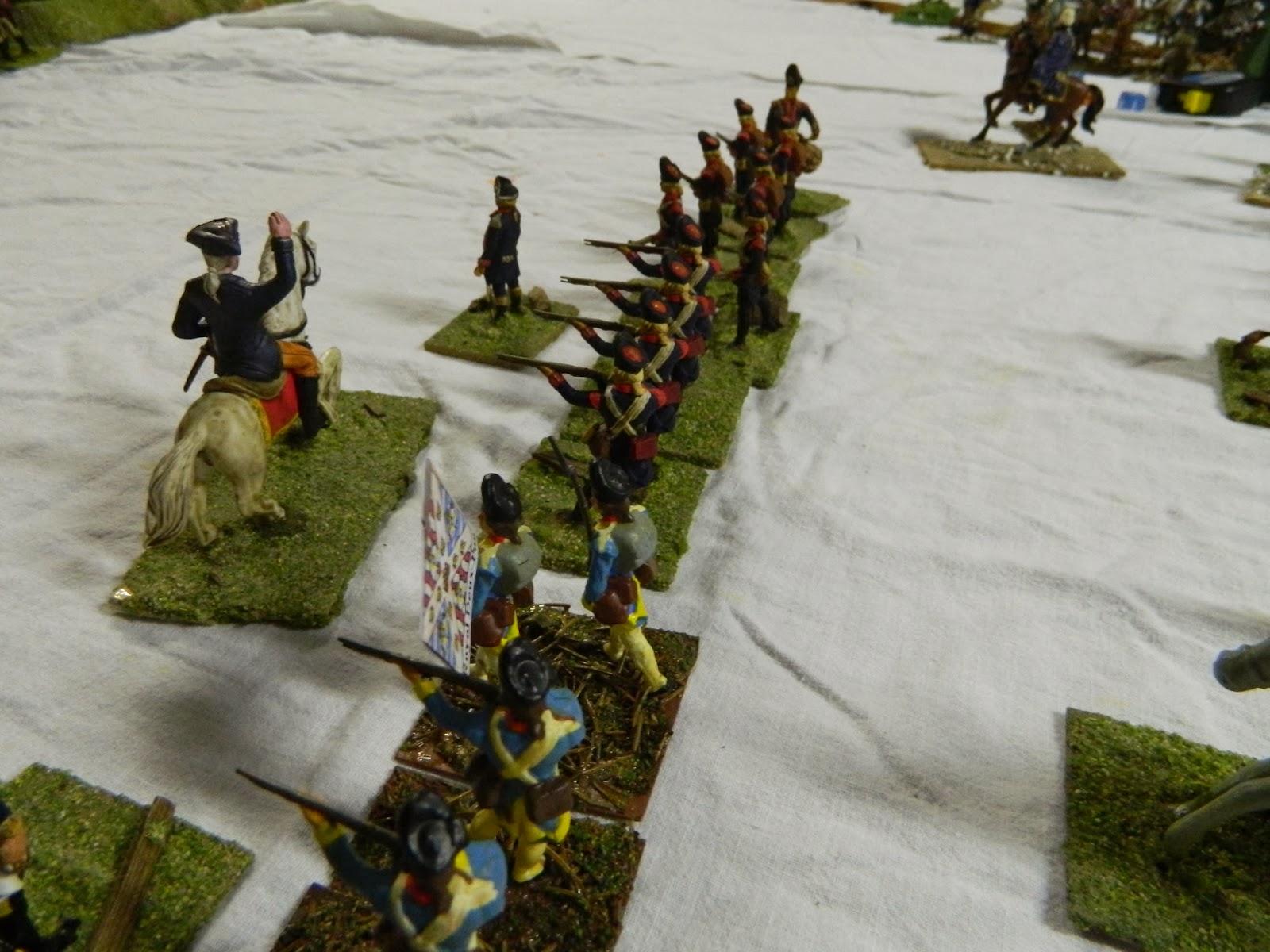 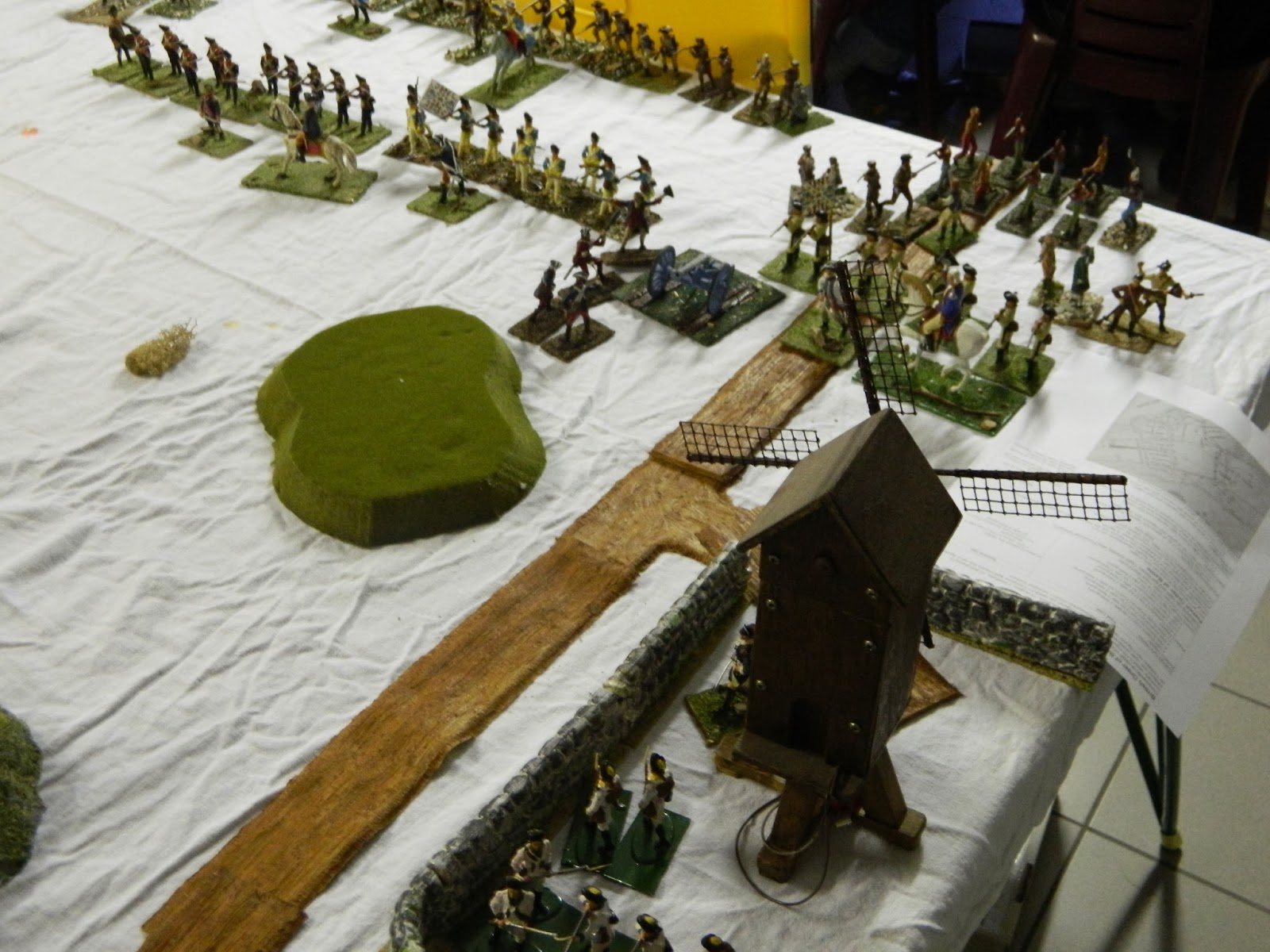 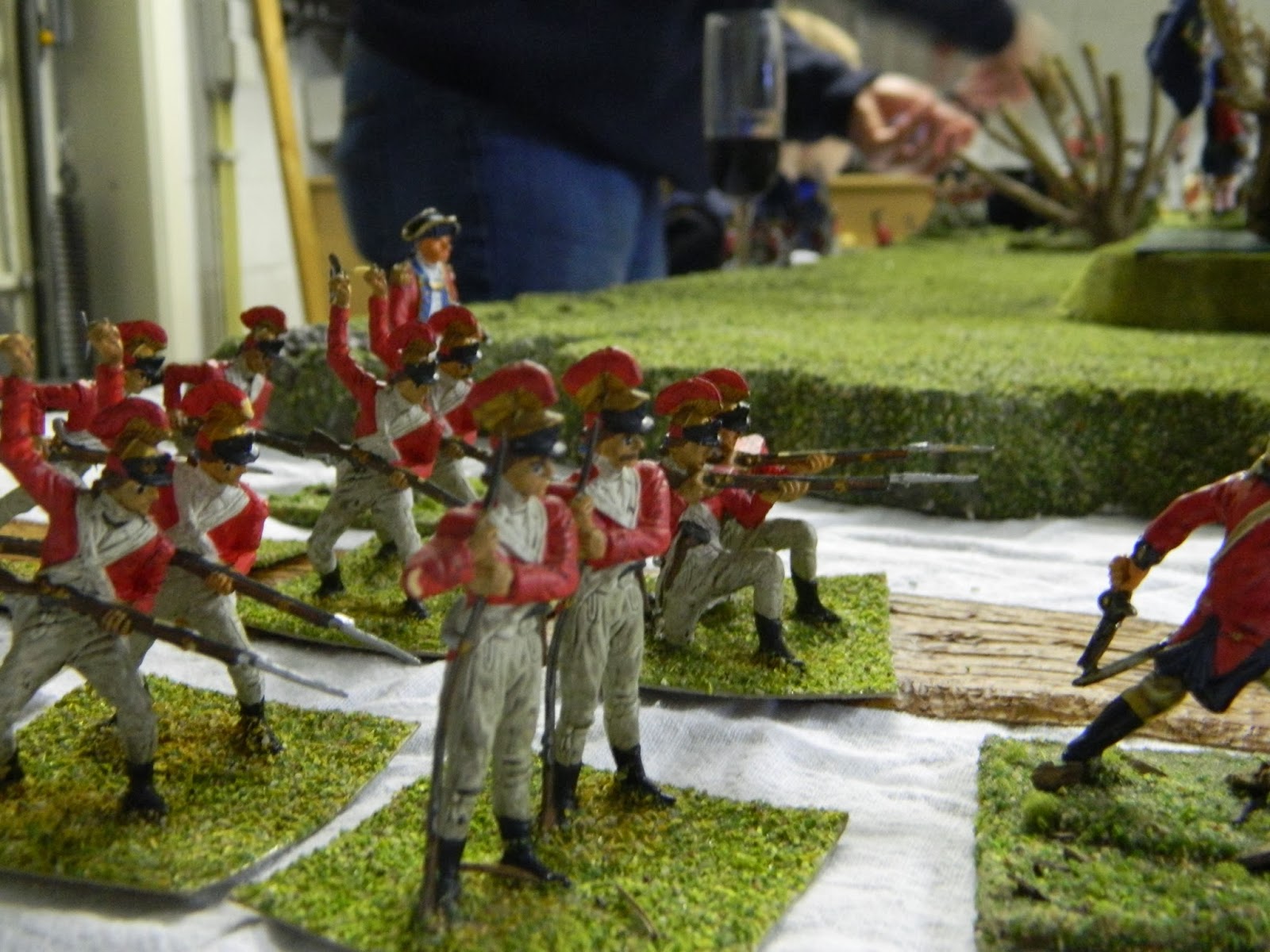 The British had a good position, and in contrast with the real battle remained on their position.
Ronny pulled the light infantry back to cover his flank from an advantaged position.
The snow in the lower parts of the field limited the movement by 3/4, 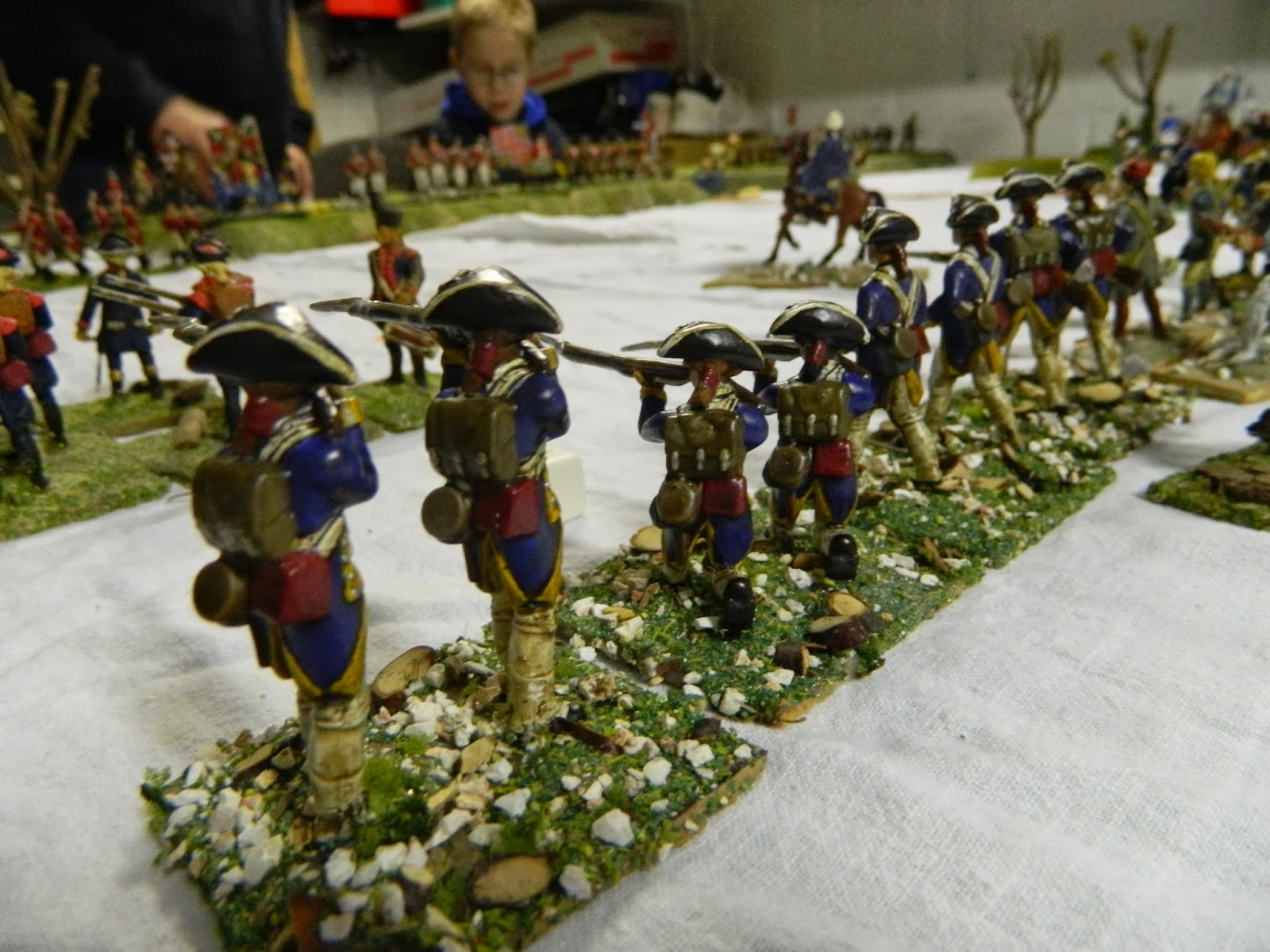 So the progress of the French was slow, Patrick kept his regulars in column to go faster.
Steven reinforced the left flank with the reserve units.
The British batteries kept silent due to their limited number of shots, waiting for the enemy to come closer and having a better effect.
The French strategy was to concentrate on the left flank against Ronny. 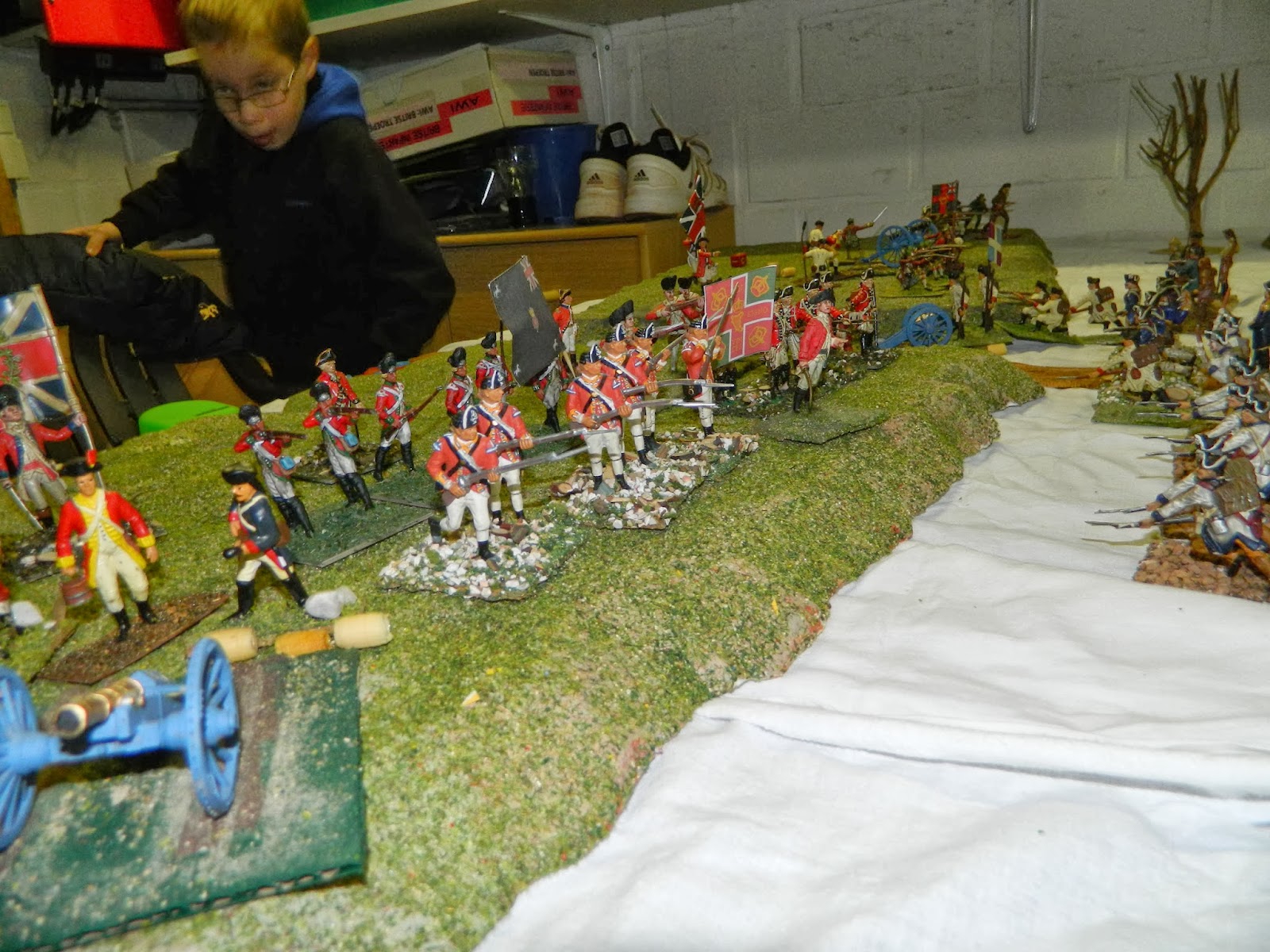 Geert waited with his grenadiers to leave the protection of the mill until the remainder of the brigade joined them, first limited musketry exchanges with Burton’s brigade. Once the La Marine brigade was in range, they became the target of 2 batteries and 2 battalions. The first battalion in line sustaining heavy casualties. 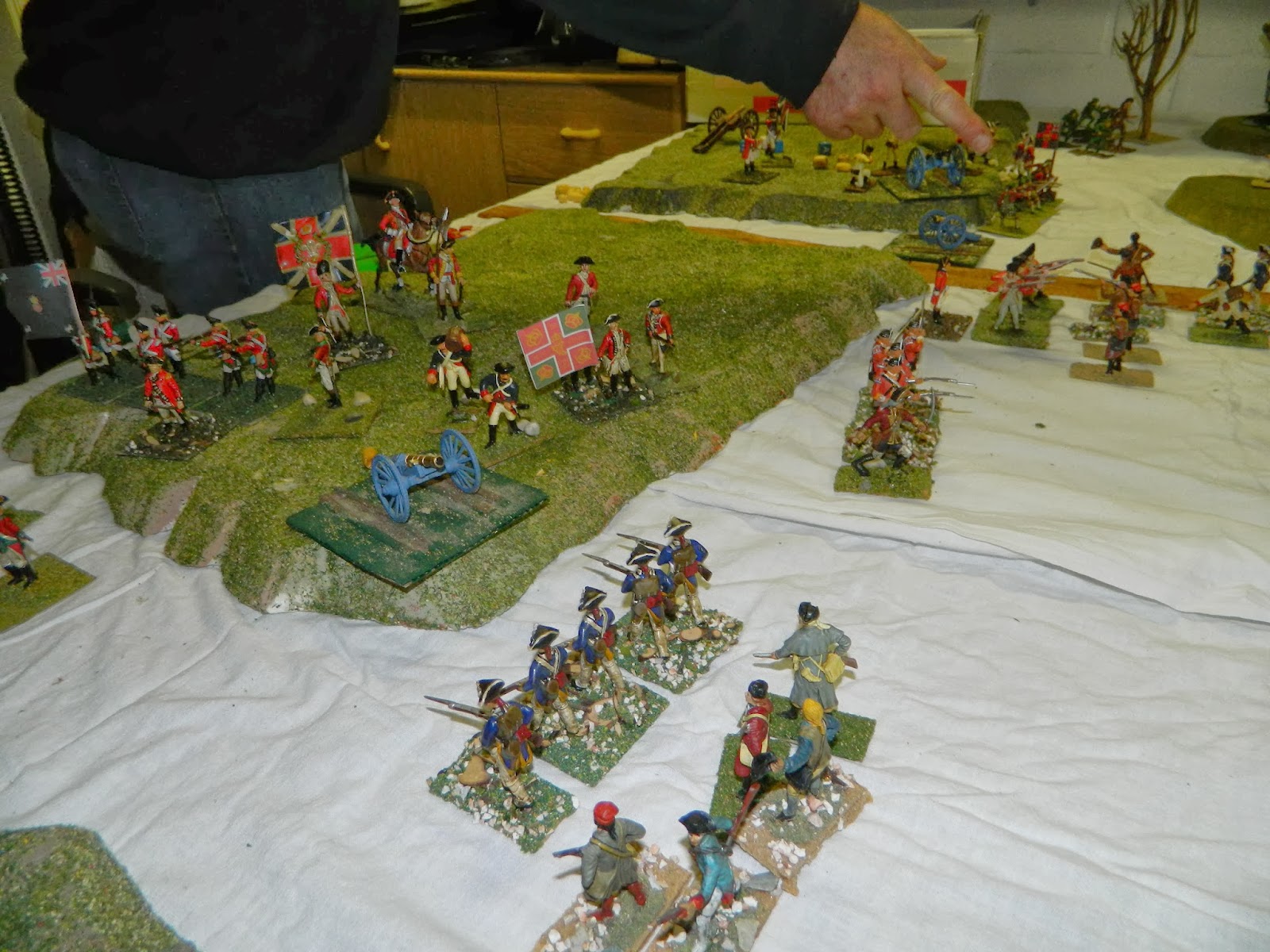 On the right, the Royal Roussillon kept advancing in column, taking casualties, but charged the battery. The battery was destroyed, but the
Royal Roussillon reduced to one stand was also removed from play. 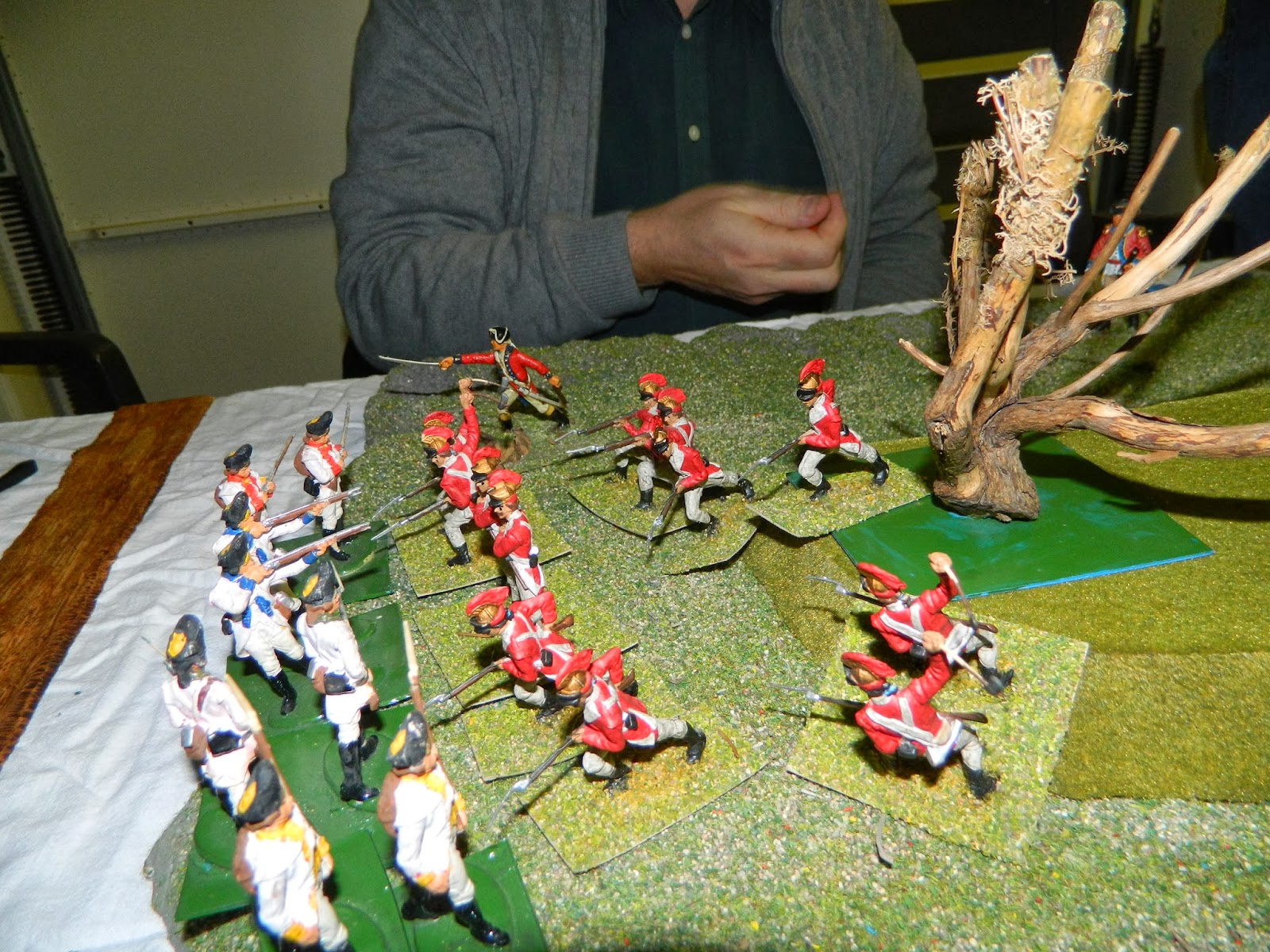 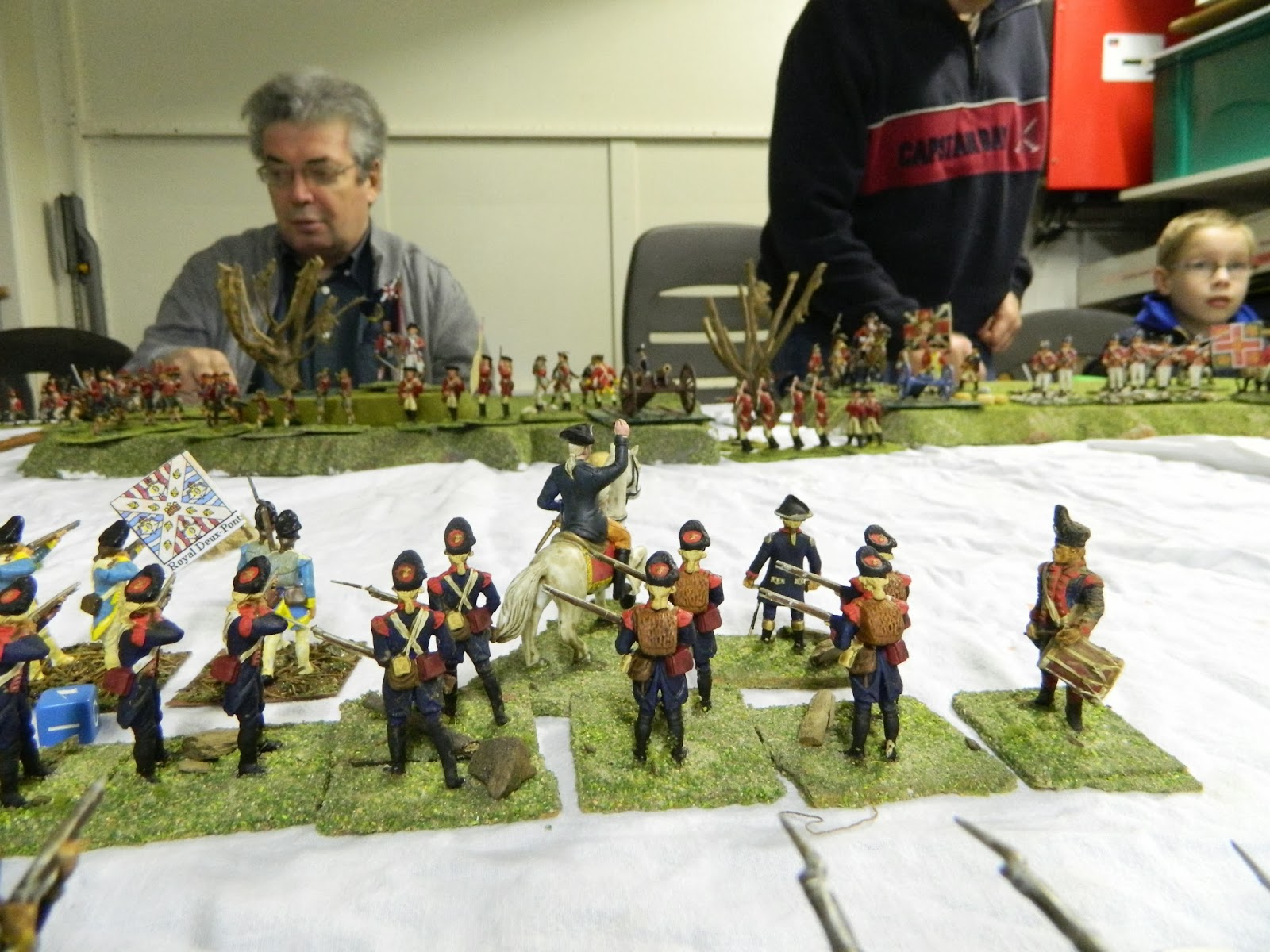 In the center one of the La Mairne units was reduced to one stand and remove from play, the second La Marine, followed up, and tried to weaken the enemy with musketry but the firing was poor, and casualties mounting. The La Reine Brigade took position to the La Marines right, but was targeted by 2 batteries and driven back, luckily with minor casualties. 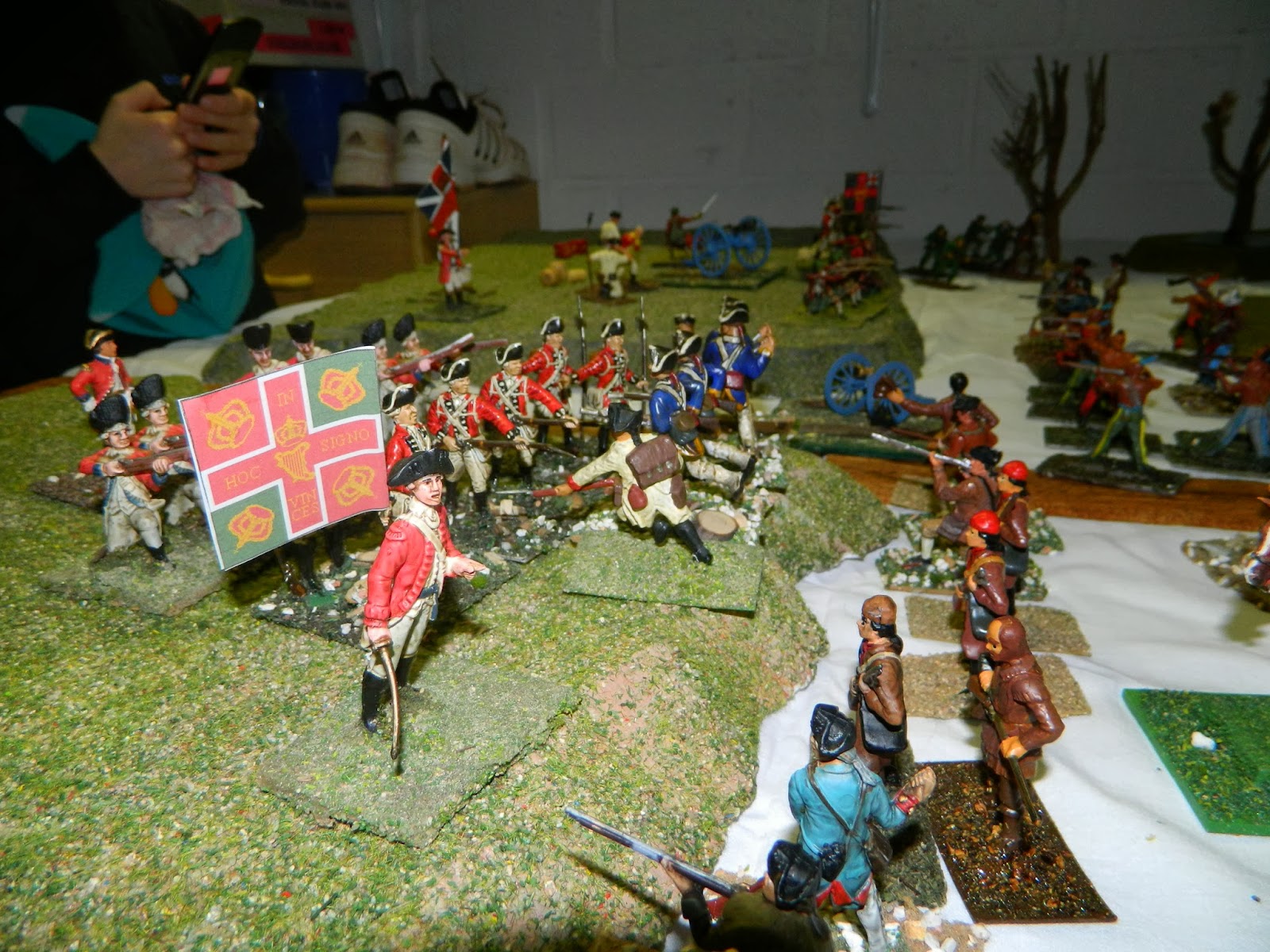 On the French right, also the Berry brigade tried to fight her way on the hillock, but was driven back to. The regulars almost wiped out. One militia unit of the Royal Roussillon was charged and broke, the Indians nearby also took to their heels. The French right was wavering. Against his nature, Patrick had to start playing defensive to avoid destruction. 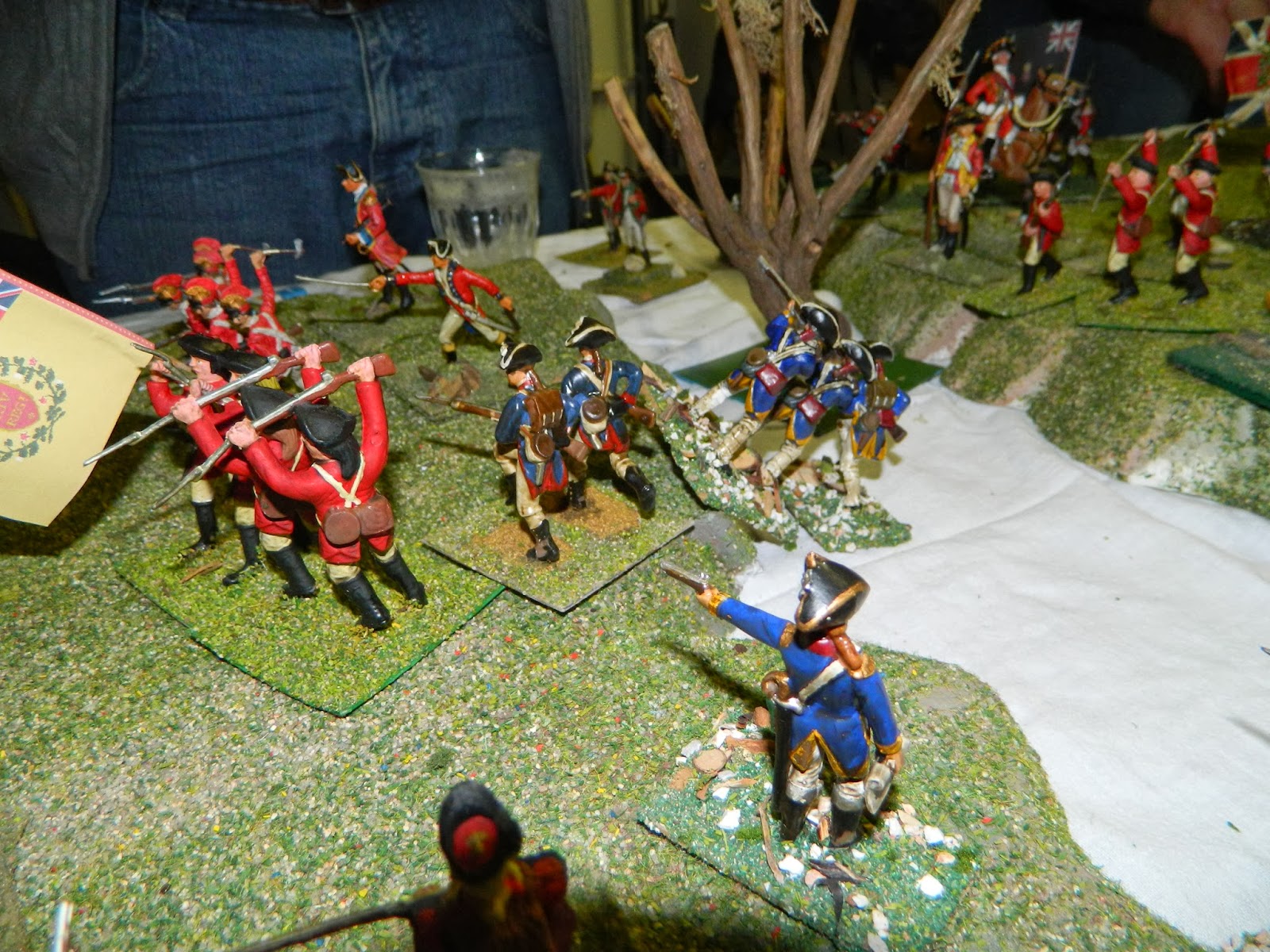 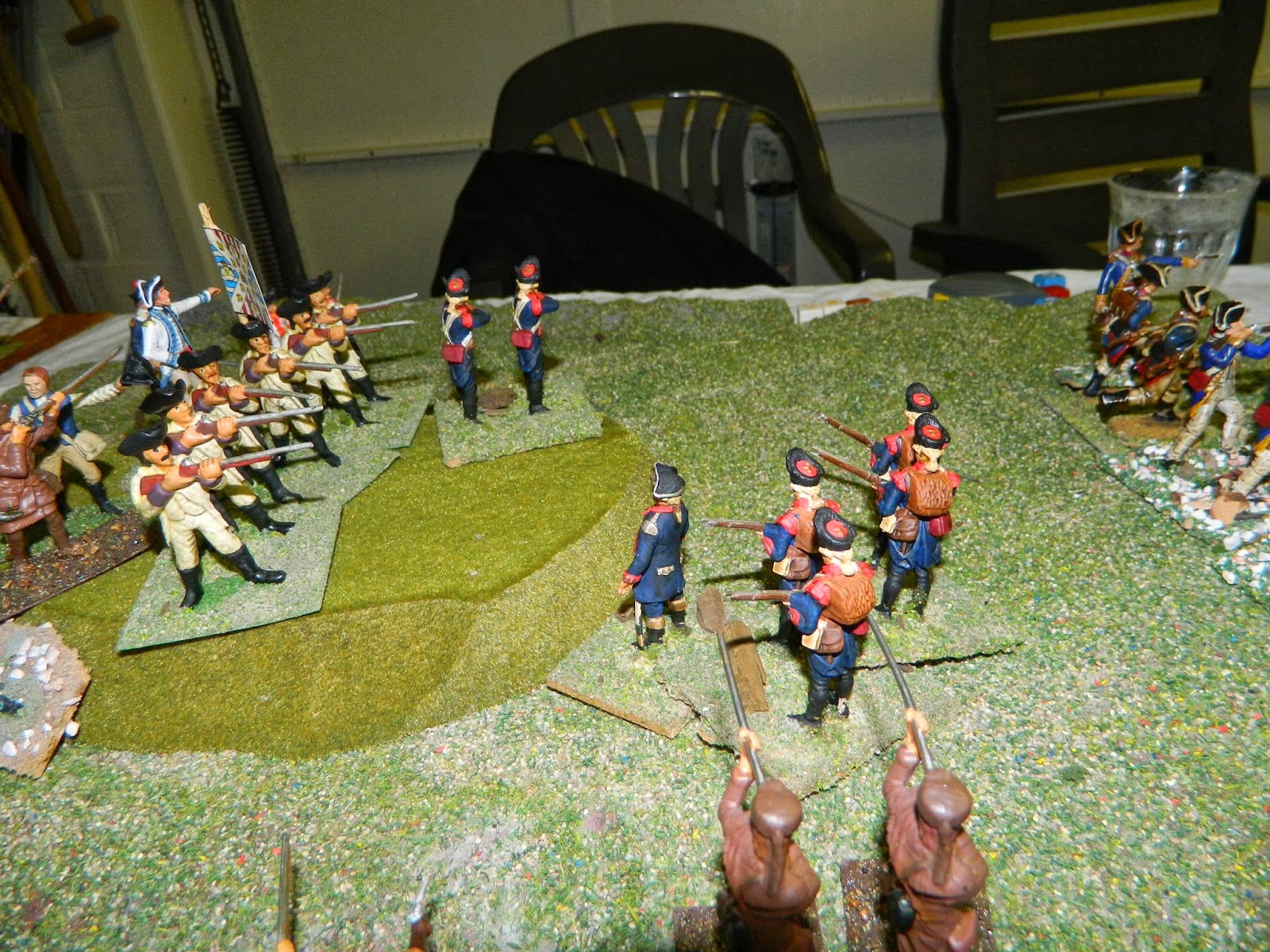 Ronny turned all his units to face the threat of the La Sarre brigade. But by now his battery had run out of ammo. It was the signal to make the charge with the still very fresh La Reine Brigade, supported by the remaining La Marine. The battery was overrun, and the breakthrough charge came into the flank of one of Ronny’s units, the latter also being destroyed. Ronny’s lines were broken. To late, Steven had diverted the reserve units towards Ronny, which command was broken the next turn. 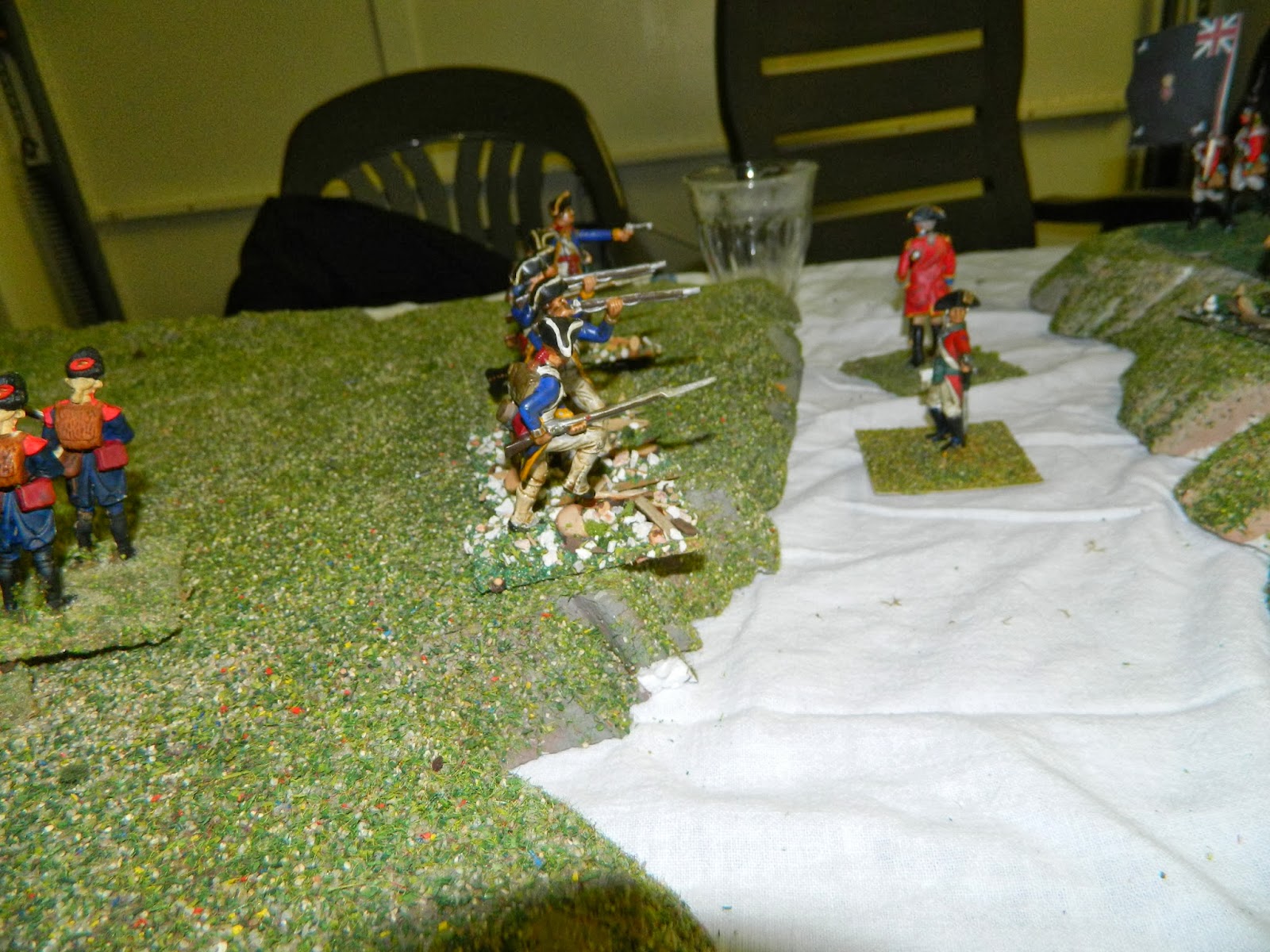 The British had to retreat to avoid annihilation.

Conclusion
Fantastic game with the outcome in balance untill the last turns.
The rule proved perfect: tactical decisions and erros made the difference between winning and loosing  in a game that lasted just over two hours.
More details of the battle at kronoskaf.com