only on privat request.
Posted by ddonvil at 08:04 3 comments:

We had about 50 British soldiers and 220 Zulu. Most of them from Steven painted by himself, Gilbert and Alex. Patrick and Siegfried also brought a number of soldiers and warriors .
A unit of Zulu was about 25 warriors and Steven did have the briliant idea to put them on tiles to allow fluent movement and clear seperation of the different units.

The Zulu could recycle the falen warriors into new units, as to have numbers in proportions the total number of tiles would number over 50.  This also mend the Zulu army could take a loss of 25 tiles before even have a moral check of 50% of the army lost.

With the rule (see below)we used, a Zulu tile(= a unit) started checking moral at 50% losses.
With the disposition of buildings and wall, the Zulu were already close from the start of the game. They soon were up to the fences, but the defence stood strong and the loss of tiles went fast for Mark and Alex who did the frontal assault.  As I saw the back of the hospital was undefended and my 2 tiles were on the extreem right, I asked Steven who was the first to my left, to join me with one of his units to take on the gatling gun, while I would try to make a run to the undefended gap.

I worked, while to the front tiles were rotating, the British troops took more and more casualties, and  with the too high presure to their front, they didn't look what came to their rear or couldn't miss a man to plug the gap.  At the end, all remaining men tried to make a run for the hospital, some succeeded, some were cought by my units but in the final chapter the massacre went on in the hospital, with every soldier killed. A total Zulu victory.

Conclusion: The Zulu could start to close to the buildings and the buildings were to far apart, with the British trying to defend everything, and in the end defending nothing. The range of 60cm for the rifles was to  short. the 4D for the gatling to few, as such a gun would fire up to 200 round / minute or even more compared to the 6 rounds a minute a soldier could to with the Martin. So it should have at least 10D or even 12D.  If you use 54mm on a similar table, the Zulu should loose 5cm of their movement for every casualty in the next round, (with a maximum of 30cm lost, which would mean : no movement the next turn)  We also allowed the second rank of Zulu to fight when in close combat, maybe this should also be reduced to only front line.
But after all a fast and fun game, beautifull figures and fantastic scratch build buildings by Gilbert.

Thanks to all participants and also to thanks to our hosts Bart & Martine.
I will trie to also make a youtube posting of the game, so soon on
https://www.youtube.com/user/PMCDMOBILISATIE 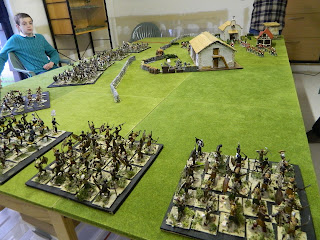 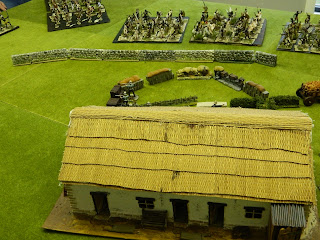 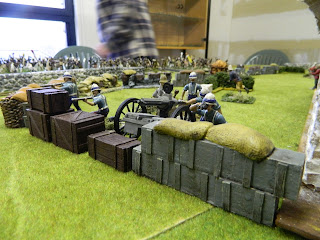 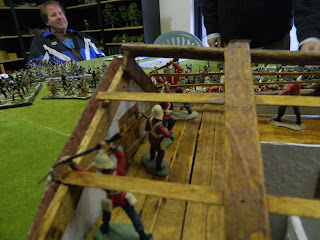 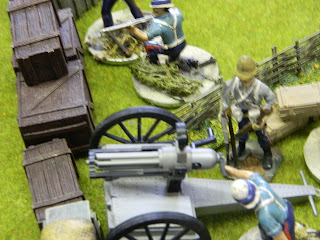 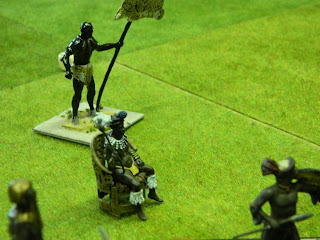 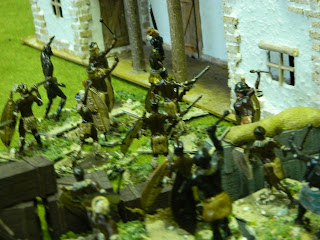 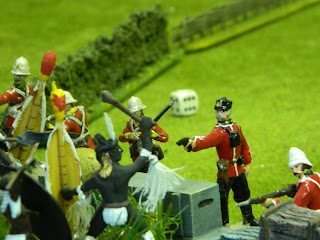 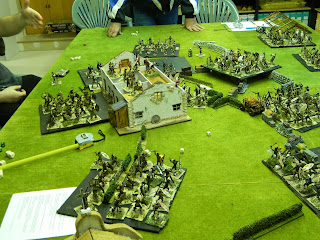 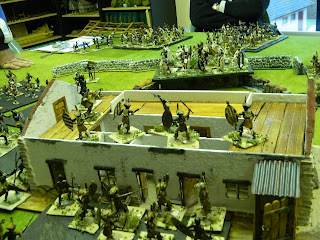 The Rule:
The Battle of Rorke's Drift
took place during the war between the British and the Zulus. The battle is perhaps best known for the film "Zulu". Rorke's Drift is a mission station in KwaZulu-Natal, South Africa, located on a ford of the Buffalo River. The defence of Rorke's Drift on 22 and 23 January 1879, following the British defeat in the battle of Isandlwana, earlier in the day. 139 British soldiers defended the mission against
a great force of 4,000 Zulu warriors. The successful defence is known as one of the bravest defences.
Zulus are first turned on. All phases are unilaterally except melee.

o British first (regardless of whose turn it is), than Zulu;
o For each figure roll a dice , hit on a 4+.
o This is followed by saving roll: 6+  if no protection ;5+ if in light cover;4+ if in heavy cover.
o Each figure can take only one loss.
o A Zulu chief can be attached to the unit giving a +1 in combat. If the unit hass taken casualties, a D6  is thrown and the chief is hit on a 6.

The Zulus can try to break through the barricade if no immediate opposition (5 cm
space). Each Zulu passes with a 4+.

The Zulus should try to enter the hospital (with a 4+ they enter). A maximum of 10 figures of each side can be inside. The British soldiers can decide whether they fight or whether to try to escape from the hospital (successful  on 4+).
Once all British have escaped or were slain, the Zulu may try put the hospital on fire (4+).

o The British never test their morale (they cannot afford it).
o The Zulus test when they have lost half of their unit: be a 3+ throw to survive;
- Two thirds of the unit is lost : throw a 5+ to be successful.
o If a Zulu chief is attached to the unit: +1 on the test.

The game ends with a victory:
o of the British if they cause 75% losses to the Zulus;
o Zulu if the garrison at Rorke's Drift is destroyed.
* * * *
(thanks to Thierry blog: http://figs.over-blog.com: original rule in French, slightly adapted here with unhistorical addition of artillery and machine gun) - Alex 01/16/2016
English, Dirk: 28/01/2016

Two titles from my favorite series 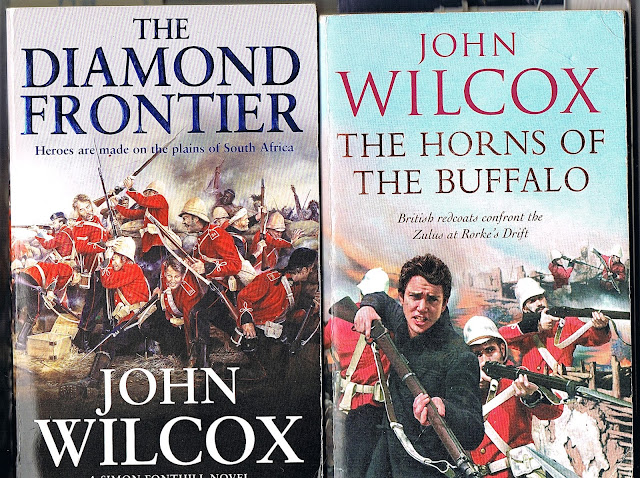 As I wrote earlier; read these! The Simon Foothill novels by John Wilcox. You'll feel as if IN the games you like to play! No colonial nonsense but great exiting stories, shining a light on all sides involved.
Posted by Marcel at 09:53 No comments: 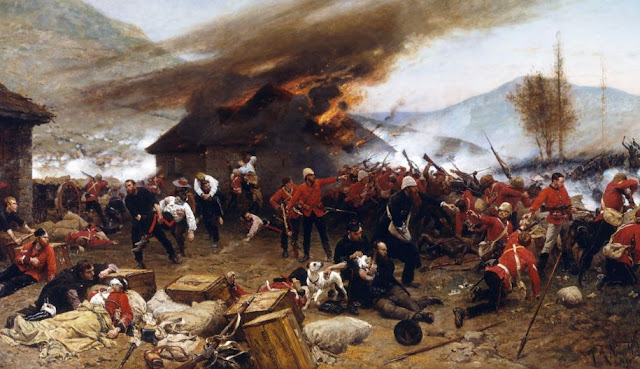 1st: A very Happy New Year to All

Friends, dear opponents and readers of this blog: In my enthusiasm of painting and building with the Revell 20mm figs. I've decided to start some SYW projects too. As you can guess I need this network to gain my sufficient figures as they are no longer available with regular shops or web suppliers.

What I initially hunt for now: complete sets, partial sets, painted figs. and loose figures from these below shown sets. Some other sets (FIW British for example) are useful too, since these fought on the European continent in the same time. French units from other brands are welcome all the same! 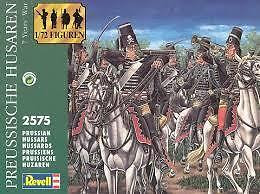 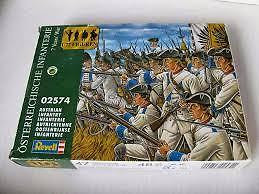 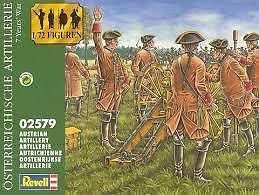 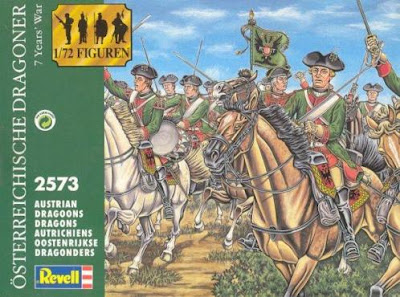 I hope this medium will again show very lucrative to ask for help in matters like these.

I can be easily contacted by means of my Facebook page titled: