the 11th of July is the Flemish national day. In the recent Wargames Illustrated (WI403), there is an article about the battle.In the previous edition(WI402), an article about the Flemish town militias. It was one of the first battles where town militia defeated and destoyed a knights army. And not any kights army: the army of France, seen at the time as the best in the world.
Link to wikipedia: https://en.wikipedia.org/wiki/Battle_of_the_Golden_Spurs
Slightly improvised but successful game. Steven and Adrien on the Flemish side. Patrick and me took the French.
The battle started with, skimishing on both sides.  On the Flemish left flank, irritated by the French archers, Steven advanced his the East Flemish militias, stretching the center and creating a weakened  only one unit deep line. 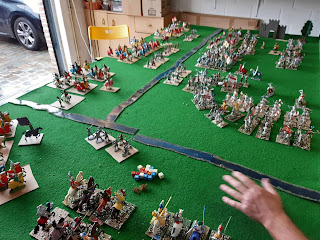 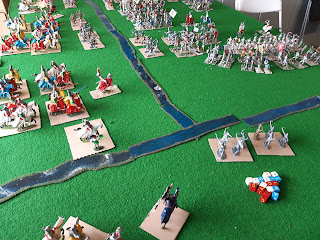 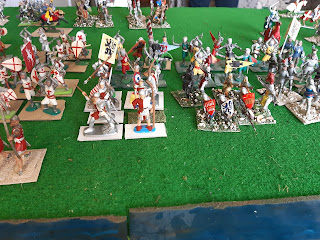 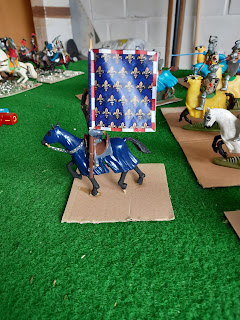 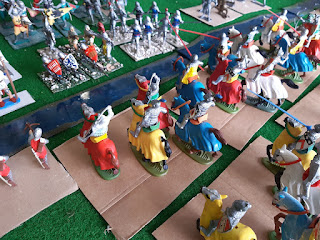 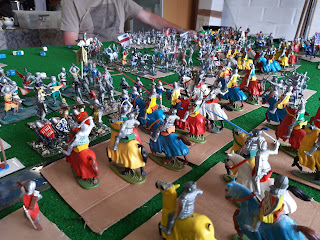 Patrick, who controlled the French center and right launched every knight unit forward.
Due to lack of space for a full charge the kinghts didn't couldn't brak any infantry unit in a first round of fighting.  But the knights in the center kept on puching the infantry back and some units broke. The Flemish center giving way
It took some time before Patrick could restore order in his knight units but from that moment, the Flemish left was doomed, receving attcks in the flank. The knights on foot Flemish reserve started to move to late to restore the line. 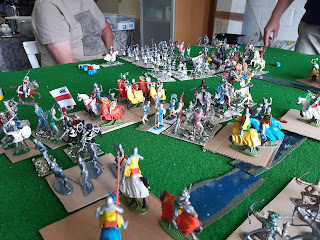 The French left had fewer units, weren't able to get a foothold over the brook and lost a number of units, closing breaking point. 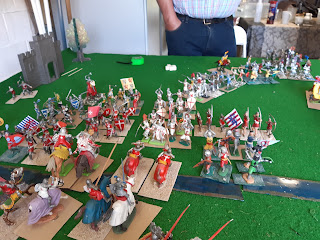 The only thing the Flemish knights on foot could do was create a second line, But now the French knights had the space to launch full scale  impact charges to victory. The battle was over. 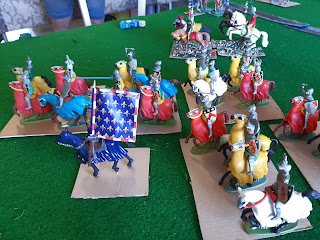 The game on the French left was much closer to what happend in the real battle. In reality due to the brooks, the French couldn't perform an impact charge and after making contact whit the militia were driven back to the brooks where their were slaughtered  or drowned . In the center, where the town militia was further away from the brooks, the French knights had room for their impact charge, and they had driven back the town militias, but the Flemish knights on foot stabilized the situation  and the French commander, Artois was killed, the remaining of the French army turning to flee. The impossible had happend. The best army of nobility in Western Europe defeated by commoners on foot.
Posted by ddonvil at 05:39