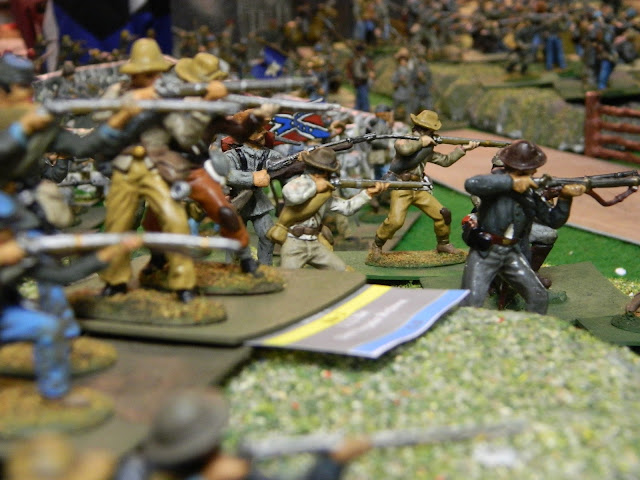 This was a fictional ACW game February 21th, 2016,  Denderleeuw.
All figures from and painted by Piet Lambrecht.
the scenario was: A strategical crossroad occupied by the Federals was abandoned due to a Confederate advance in overwhelming numbers. With some reinforcements  arriving a front line was established some distance away from the crossroad, hoping to keep the line while awaiting the reinforcements to come in force.
Our game starts here. 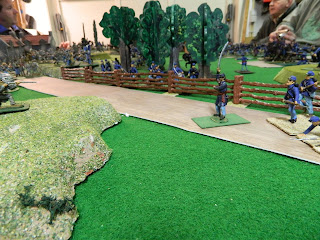 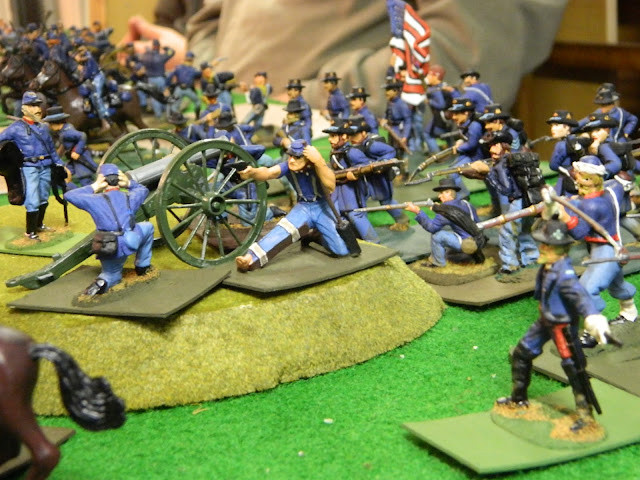 But first some notes on the composition of the armies.
The "About Bonaparte" ACW adaptations were used: 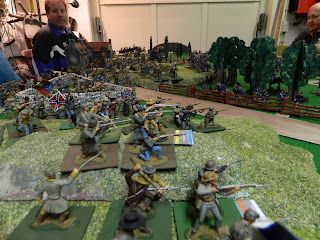 Confederates have smaller units (4 stands) but are all veterans except the Louisiana Tigers 2 regiments, which are Elite. Also for the infantry charges only the Confederate still have the charge bonus.

The Confederate artillery batteries however are less powerful, average of 3 figures while the Federals have an average of 4 figures.
The Federal regiments are bigger in size, almost all of them having 6 stands. Only the sharpshooter unit having just 4 stands, but being veteran, and in fact the only veteran unit on the Federal side. There is however the Iron brigade, with the two regiments being Elite.
Both sides have also 2 units of (light)cavalry. They can dismount and fight on foot, with high firepower at close range (revolvers/carbines) but almost none at long range. Dismounted cavalry will act as skirmishes while being charged.
Also the Confederates have one sharpshooter unit which can act as skirmishes.

Five player-brigade generals on each side. 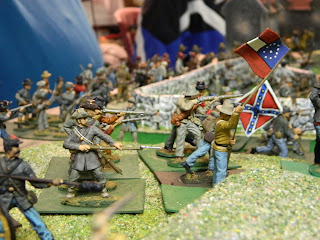 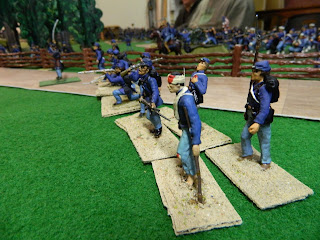 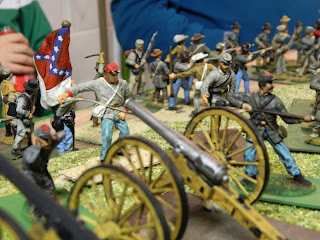 Pots, on the Confederate right dispatched his sharpshooters into skirmish formation towards Patricks who's regiments had taken positions behind a fence. . More to the centre Adrien targeted Patricks regiment in the Woods, which was forced back into the Woods.  My two front regiments and battery were charged by Steven, pushing my units back and my artillerists abandoning their guns.  Marcel did a cavalry charge and was able to force back the targeted regiment. 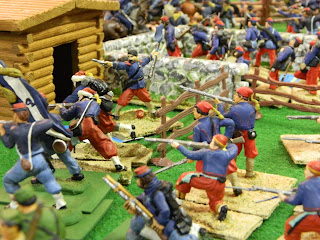 In our turn, I tried to retake my battery but wasn't able to do so, My regiment driven back with losses.  On our left Patrick firing line inflicted a number of casualties on the Confederate sharpshooters. 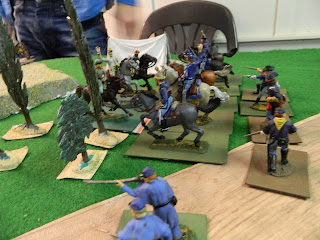 Piet's cavalry on the Federal right had come to the field and immediately attacked the Confederate cavalry of Marcel, but unable to drive them of, the fight evolving in a continuous melee. Also his battery inflicted losses on a regiment in battle column . 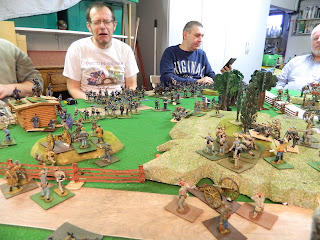 In the second Confederate turn we saw them continuing their aggressive move. While Patrick was able to keep his line, his regiment in the woods even drove of an attack of two Confederate regiments. 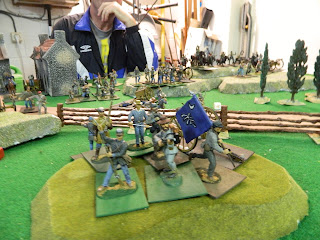 One of my regiments broke, the other one had to give ground. Steven kept one regiment with my lost battery to spike the guns, while another of his regiments attack and drove one of Piet's regiments to the rear. In our turn, the reserves were now on the field. 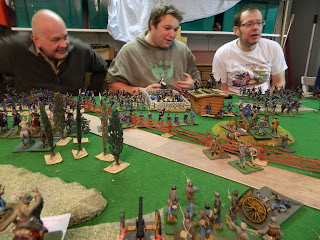 Geert immediately deployed his batteries into a grand battery that took on one of Stevens regiments with great effect, the unit immediately halved.

One of pots’ regiments also took casualties. On the Confederate left, the ongoing cavalry melee raged on without decision. 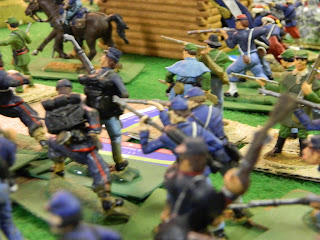 he next Confederate turn Steven pushed further. It was a tense moment for me. While my two reserve units were still in mars column,  I was hoping my worn remaining regiment in battle formation could hold the line and would not break, a breakthrough charge on my mars column regiments would almost certainly break my command, and the battle lost.


The regiment was beaten back but stayed on the field, the Attacking Confederate units didn’t breakthrough. Also Pots charged the Federal sharpshooters but them too , chased back didn’t’ quit the field, his command also holding out. 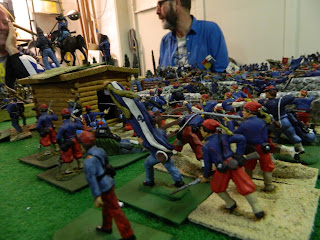 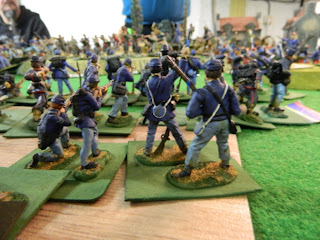 The Federal turn now.  Patrick on the left returned with his sharpshooters,  Pots’ regiment dissolving. 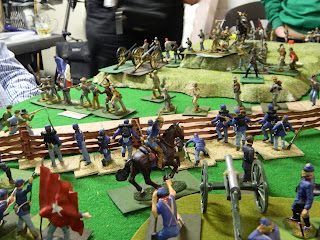 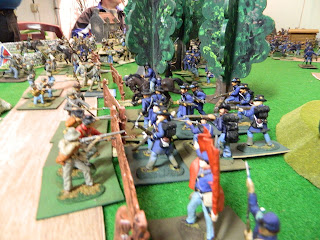 The Iron Brigade of Geert taking position behind the  woods ready to take on any Confederate. In the centre I was able to form my firing line, and with Geerts grand battery creating one huge killing ground. 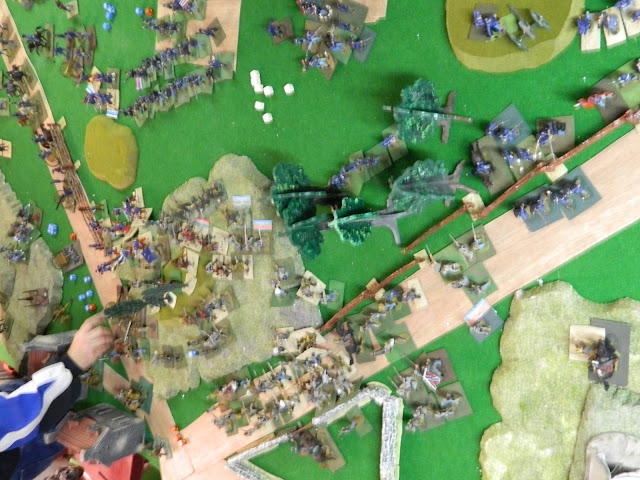 One regiment destroyed, another one driven back. It apparent now Steven’s  advance without support from Adrien or Robbe has put him into trouble.


The Zouave brigade of Siegfried advanced aggressively destroying yet another regiment of Steven.

Piet was able to rout the remains of the first Confederate cavalry regiment. And deployed his reserve regiments in line. 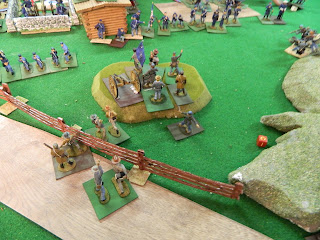 The odds had changed. Stevens’ command all but broken, Pots command even so, Marcel not strong enough to mount offensive actions, and Robbe and Adrien bogged down, behind the woods and on the central hill, chances of a Confederate victory fading away. 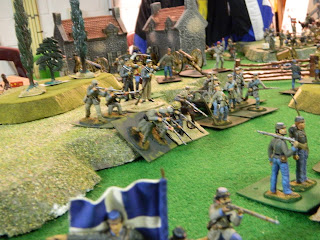 The final turns, the Confederates tried  to consolidate their position , and still not able to break Patricks regiment in the woods. Siegfried with his Zouaves effectively pushing back Steven and Marcel almost reached the Confederate base line. 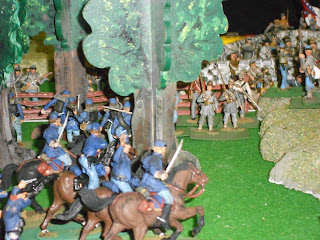 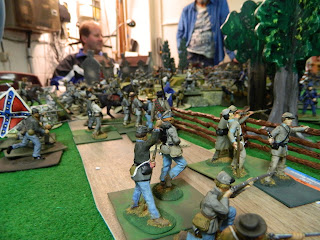 the left One of the Iron brigade regiments broke one of Pots’ regiments with a charge another on destroyed by musketry, and the Confederate sharpshooters undergoing the same fate.

Pots’ could do no other than to sound the retreat. 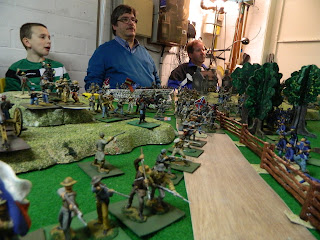 The two brigades of Adrien and Robbe now confronted with the risk of being outflanked or even surrounded had no other option than to admit defeat.


A close run thee hour game, with everything in it, accompanied with fine Belgian beer and chocolates . An afternoon to remember. 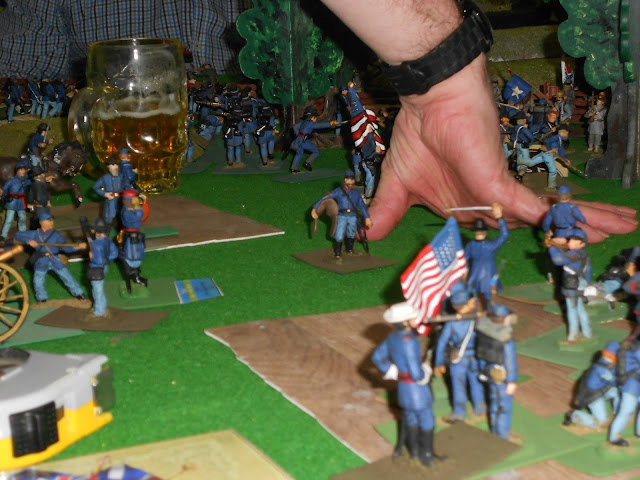 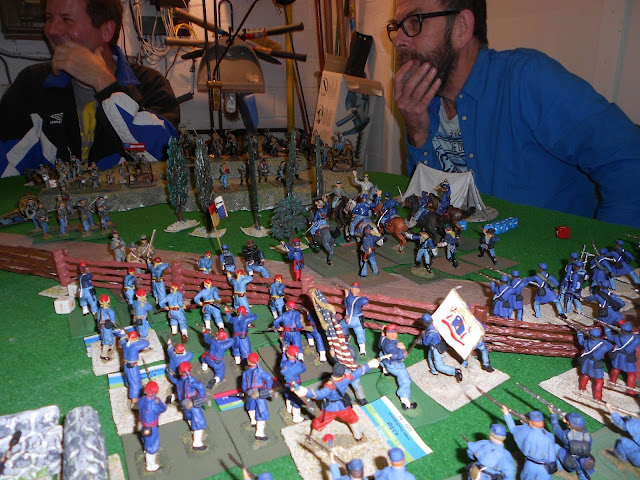