Plastic and Steel 2021 - our presence with 2 games. Western shootout game 54mm and 1/72 Napoleonic

The game we run was a western shootout game, with the same fast rules as our previous, "The Gold of the Confederates" game.  6 players, each of them taking a team of 4 figures, all teams having an objective but each objecitve being the oposite for another team (team cards at the end).   Also, , events can take place during the game. On a 4/5/6 on a D6 something happens. Also see end of the article: the list of 12 events: D12 to decide which. 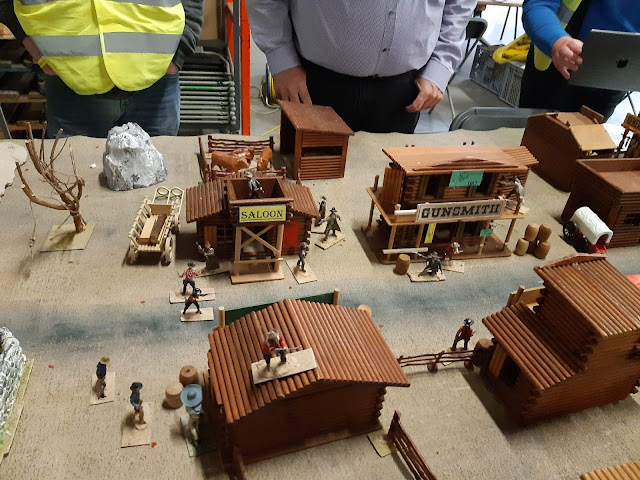 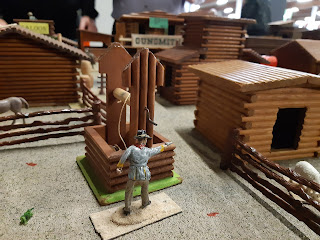 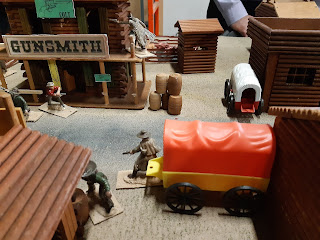 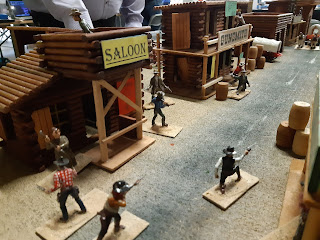 The OK Coral Cowboys at the Saloon 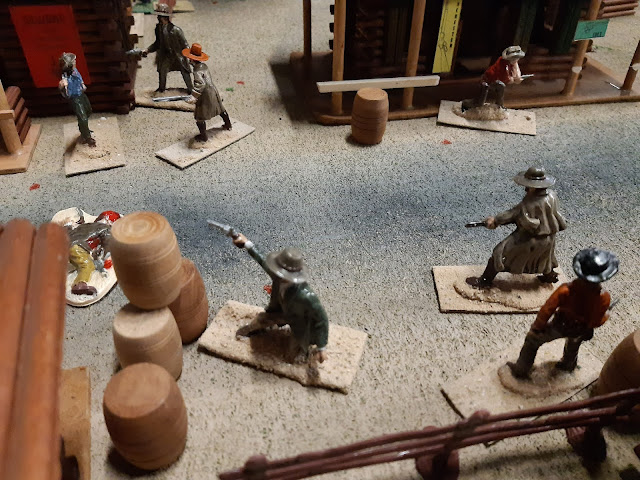 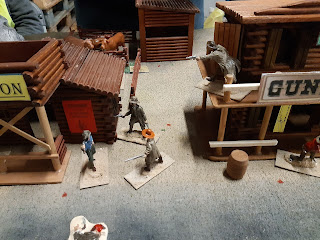 View on our second game, an alternative history on what if Napoleon had won Waterloo. 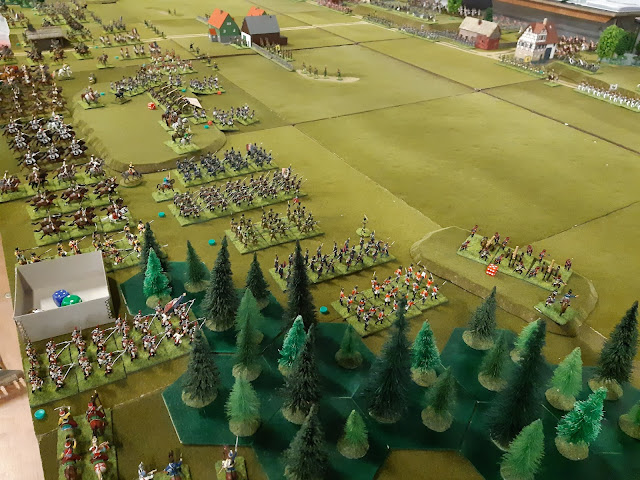 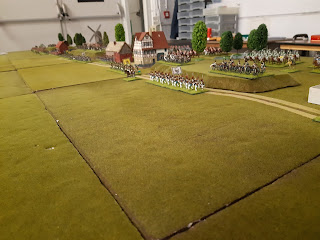 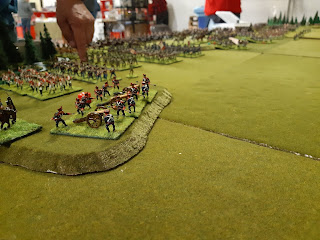 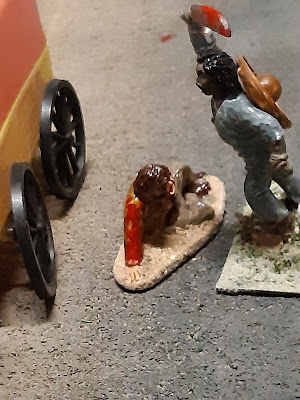 The crazy Mexican with the machette:  event 11 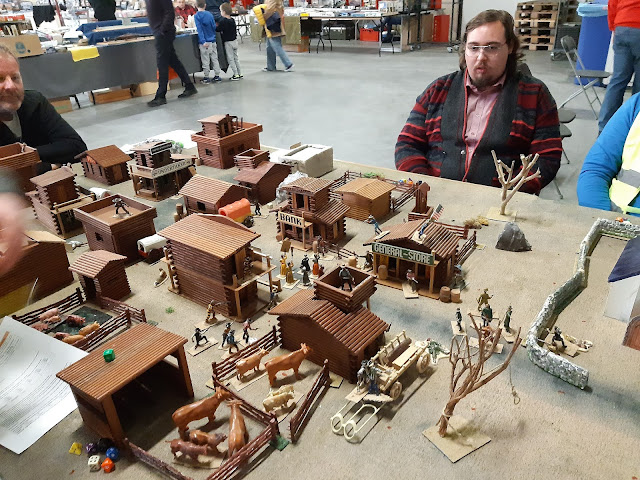 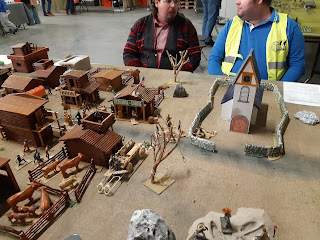 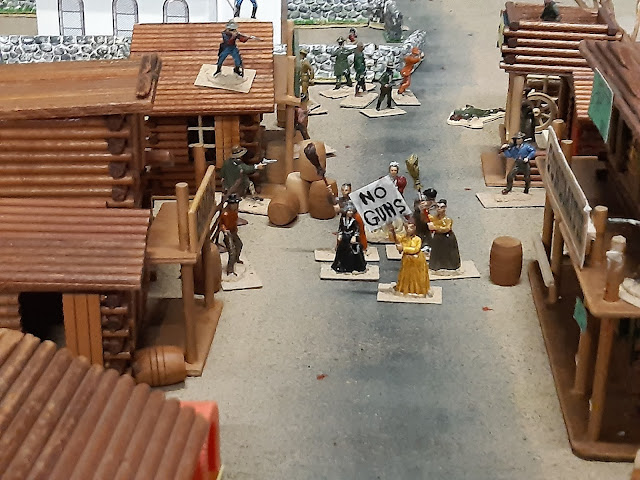 The demonstration against fire arms 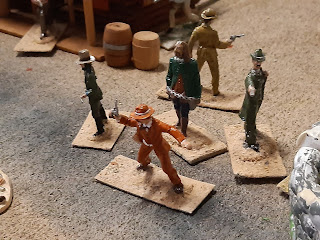 The Pinckertons on their way to the gallows. 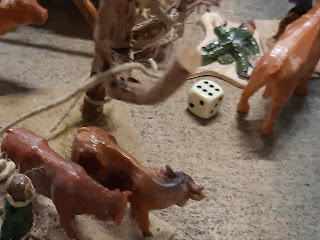 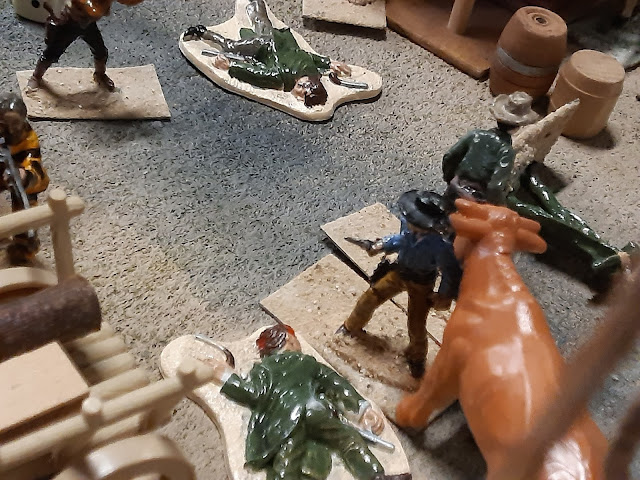 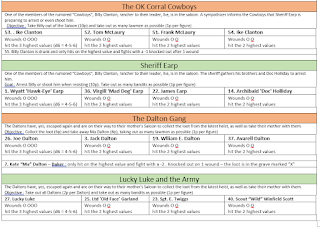 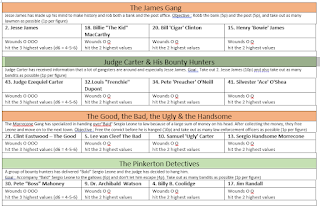 1. A demonstration of women against weapons leaves from the church for the Town Hall. They move 20cm per turn and continue to protest for 1 turn in front of the townhall. Player figures that come in their way are attacked with boards and brushes. They attack with a D4. You may not attack or shoot the women yourself, otherwise the 4 nearest civilians (armed figures) will get involved and take an aim at your figures- hit at highest value)

2. Horses from a cart run wild, the game leader throws a die to decide from where and to  the horses run. Whoever is trampled by the horses gets 1 wound.

3. Drunken Mexicans stumble out of the saloon, when they see a man of law, they shoot at him. (1 turn)

4. Drunken Mexicans come out of the saloon, when they see a figure of a player, then one of them throws a stick of dynamite. (1 turn only)

5. Mexican workers are repairing a house. One of them has recognized a bandit who has ambushed him days before. Together with his mates he goes after the nearest bandit: 30cm per turn they stop when the bandit is knocked down or when one of the Mexicans is shot

6. A hungry Mexican has stolen a pig and is running away with it. If he encounters a player’s figure on his way to the edge of the table, he shoots at him.  Each turn 30cm until he is off the table.

7. 2 hungry Mexicans have each stolen a bag of flour each in the general store and are trying to flee with it. If they come across a player’s figure on their way to the edge of the table, they shoot at him. Until they are off the table (shortest route).

8. Cows break loose from their enclosure and run through the city. Each player controls one cow run 40 cm (for 2 turns). A cow inflicts 1 wound when it knocks over a figure. The animal may only knock over one figure per turn and not twice the same figure.

9. A drunk cowboy emerges from the saloon and challenges the closest figure of a  player (with on or two pistols ) to a duel. Both figures fire simultaneously. The cowboy only hits on the highest value . duel at 30 cm from each other. Firing until either one hits, the cowboy is nocked out with one wound.

10. 8 Mexican horsemen ride down the main street, firing at everything and everyone. 60cm per turn. Untill they leave the table.

11. A crazy Mexican runs through the village with a machete. All players roll a D10 die. The player with the highest value controls the Mexican. Throw at the end of every turn. The Mexican runs 30 cm. (or climb up +10cm) He stays in play until shot down.

12. A doctor comes to the rescue. All players roll a D10 die. The player with the highest value chooses one of his figures to be treated and one wound no longer counts.

Yes I know, a lot with Mexicans, but as I have the figures, I can use them that way.
Posted by ddonvil at 06:04