I love it when I can play a game on the exact date of its anniversary. This year Waterloo fell on the same date as our local minicon so I got to run the game at my club. Unlike the time I ran the game in 2017, to save time, I did not bother with trying to model the terrain. I used a flat table but I did delineate a foot of table that represented Wellington's reverse slope that shielded the allied units from direct artillery fire. The three British players placed most of their units on the reverse slope and this worked against them later when they needed to maneuver those units quickly.

There were two forward fortified farm complexes held by the British at the start of the game:  Hougoumont, on the far British right, was held by the British Guard light companies and a unit of Brunswick light infantry, while in the center, the farm of La Haye Sainte was held by a unit of Rifles. For the purposes of the game, both complexes were represented by much smaller footprints than was historical. The rules we used are a variant of Neil Thomas’ Napoleonic Wargame rules called Frog and Toad. Neil Thomas is known for his quick play One Hour Wargames. In my opinion, simple rules work well with my 54mm miniatures.

Every Waterloo game I have played in or run resulted in a game were, to quote Welllington: "They came on in the same old way and we defeated them in the same old way." This is because the French commanders all want to get into the action and the result is separate uncoordinated attacks all along the British line which are easily held off with the usual British defensive tactics. This time the French commanders tried something new. The players on the left and the center played holding actions or at best demonstrated against their respective British opponents. The commander on the right mounted a strong infantry attack that was supported by almost all of the French cavalry.

On the left the French advanced into the woods surrounding Hougoumont but were thrown back by the defenders. The rest of their infantry advanced between Hougoumont and La Haye Sainte and stopped to allow the artillery to fire over their heads on the British and allies who were visible on the ridge. In the center, the main French artillery blasted the British left in preparation for the infantry attack. The massed columns on the right made steady progress up the hill towards the British line.

Back onn the left, French and allied light cavalry fought a duel that ended with the British in undesputed possession of the hill behind Hougoumont. In the center the French were able to force the Rifles out of La Haye Sainte and the advance on the right continued, with the addition now of the Old Guard.

There was much action on the French right when the columns came within musket range of the Belgian units in the front line on the crest of the hill. One Belgian unit was destroyed by volley fire and the other lost a melee against three French units. The British Guard cavalry next charged into the French column and took out two French battalions but it was then blown and routed from French close range musket fire. Too late the British commander in the center sensed the danger and tried to maneuver his foot and cavalry units to reinforce the left but he was stuck in a log jam trying to exit the reverse slope. We called the game a French victory after the French Dragoons overran a British battery and the Old Guard, Cuirassiers and Carabiniers had reached the top of the slope, ready to plow down the flank of the British. 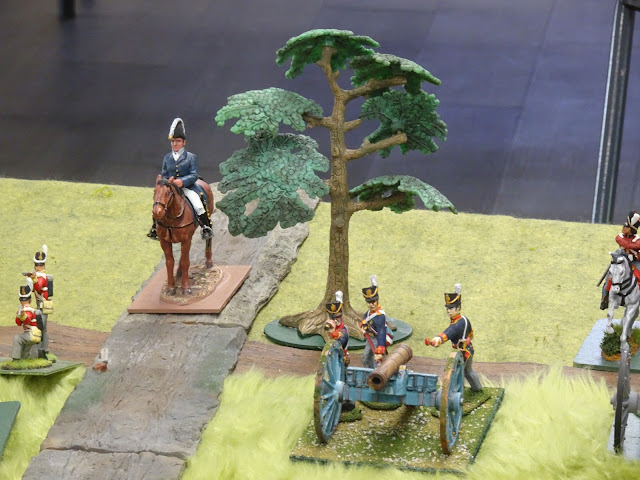 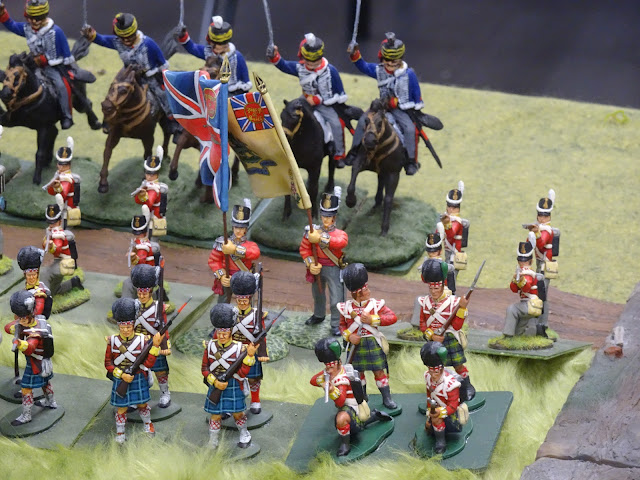 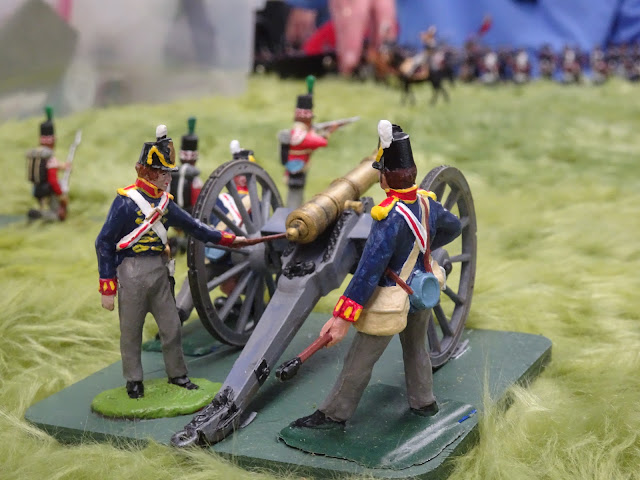 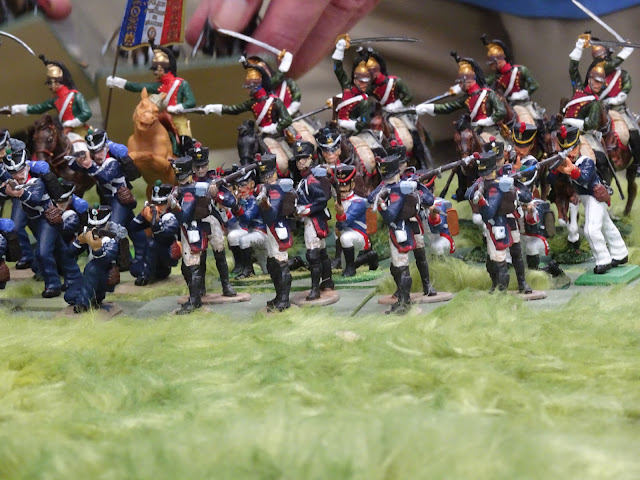 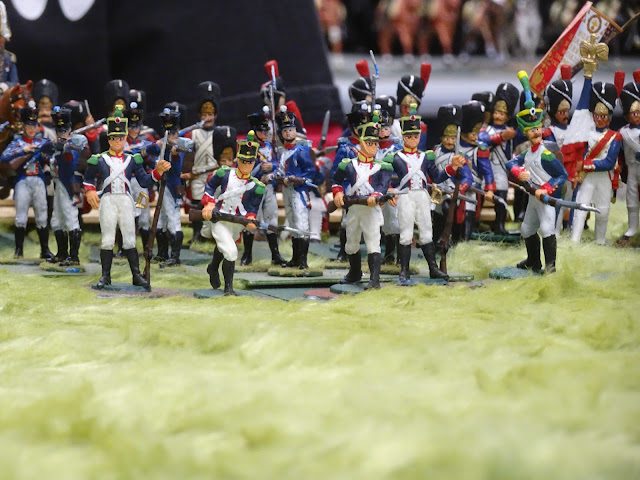 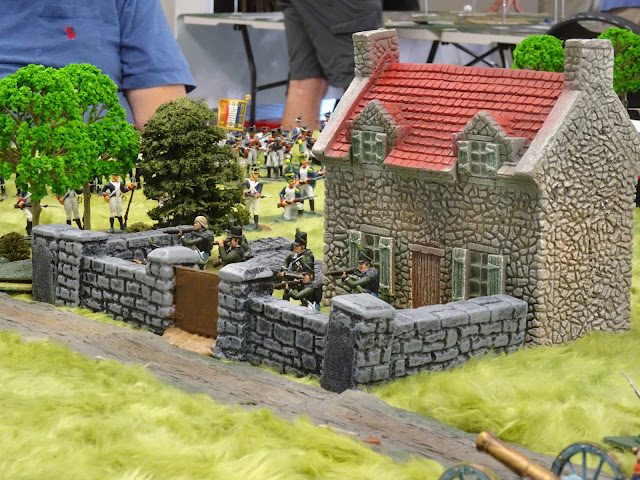 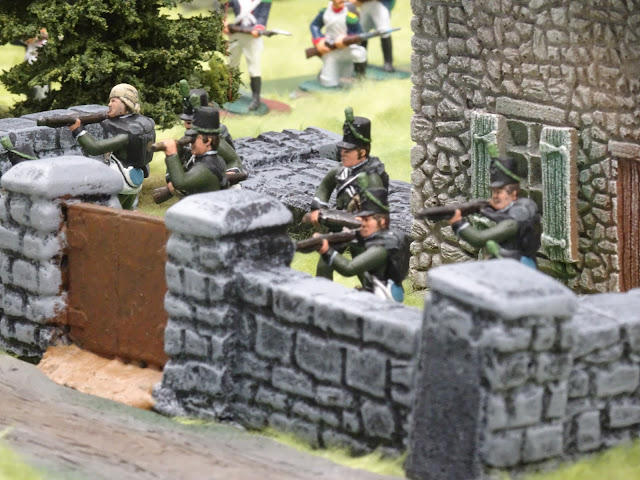 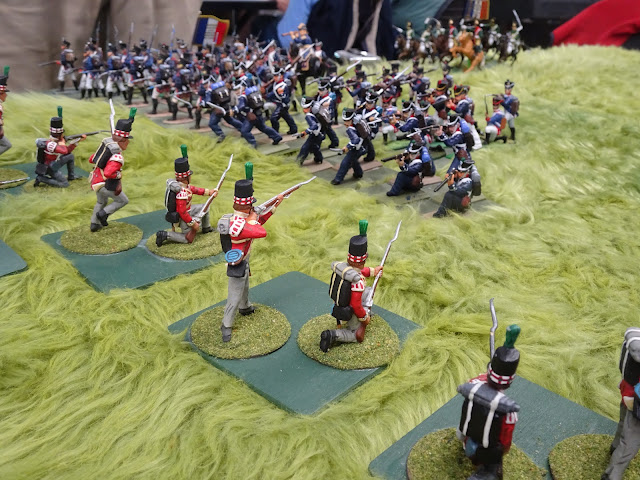 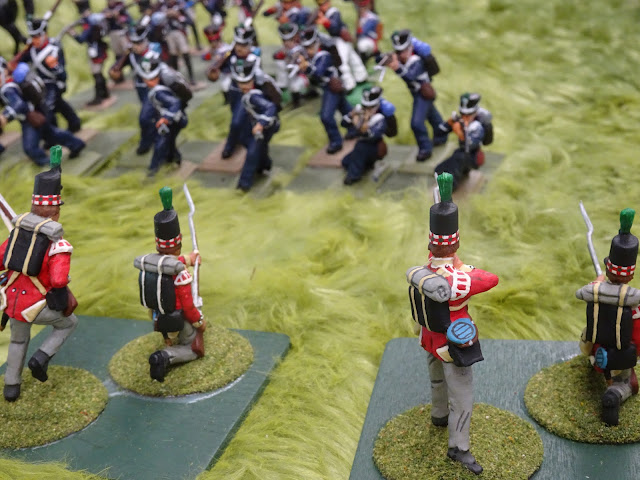 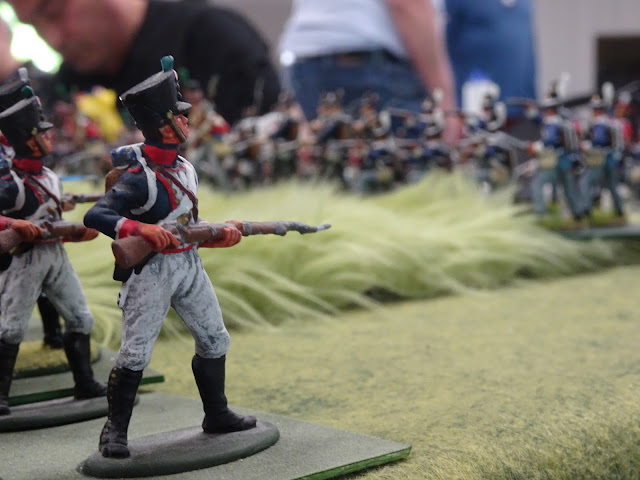 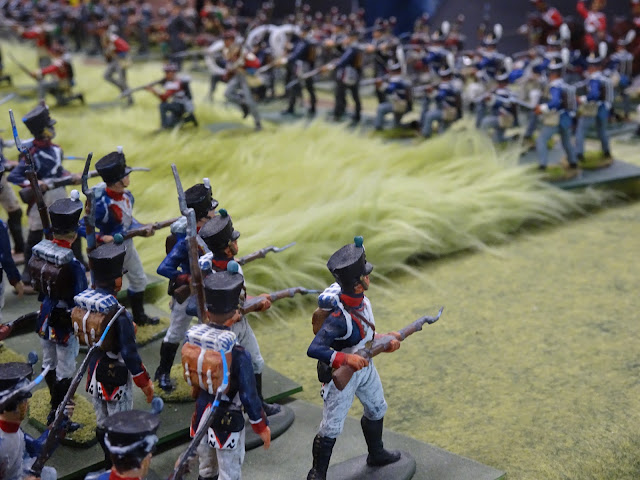 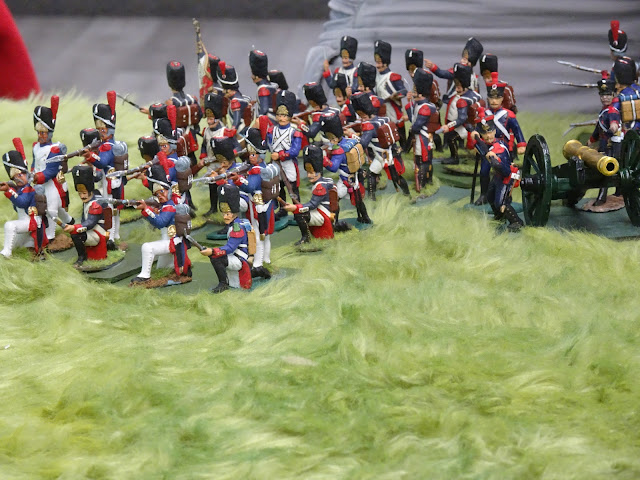 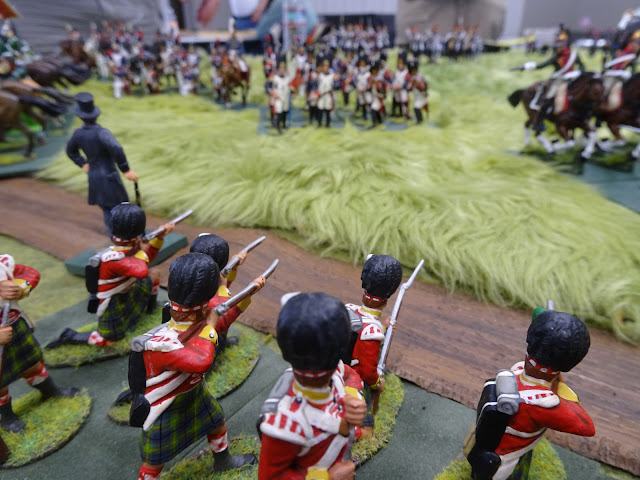 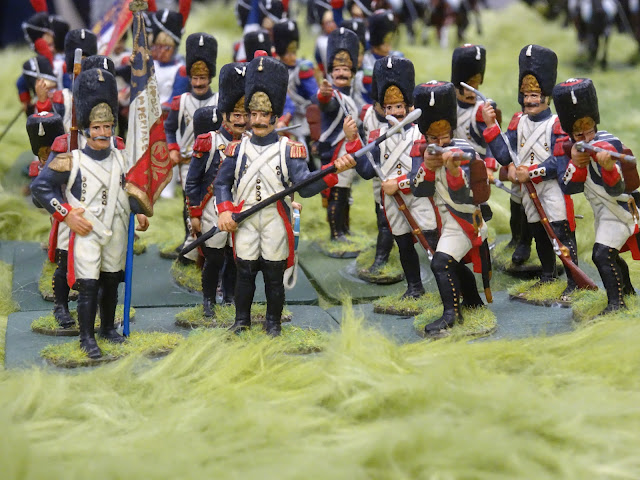 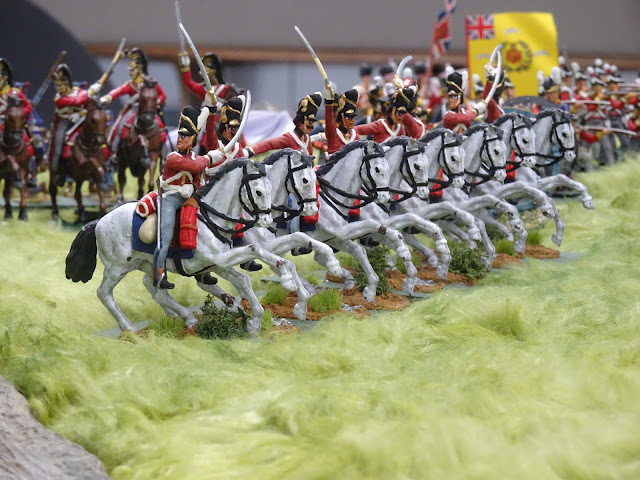 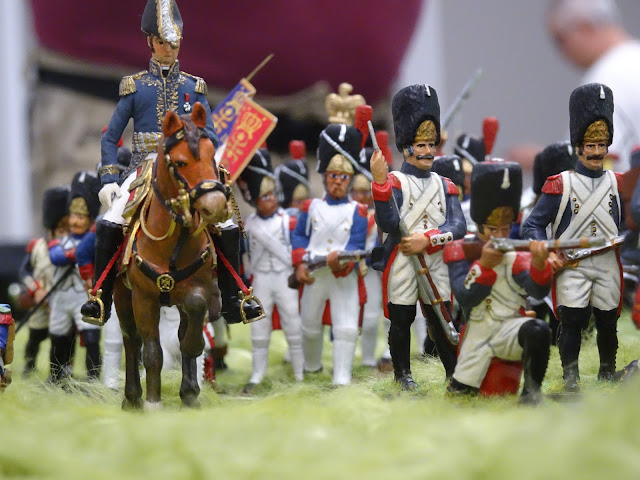 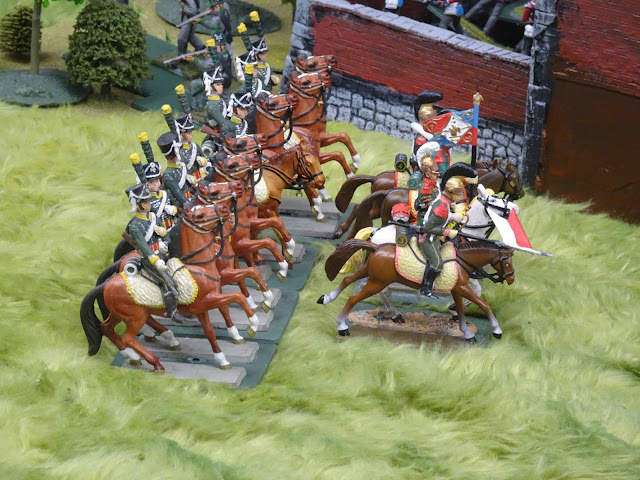 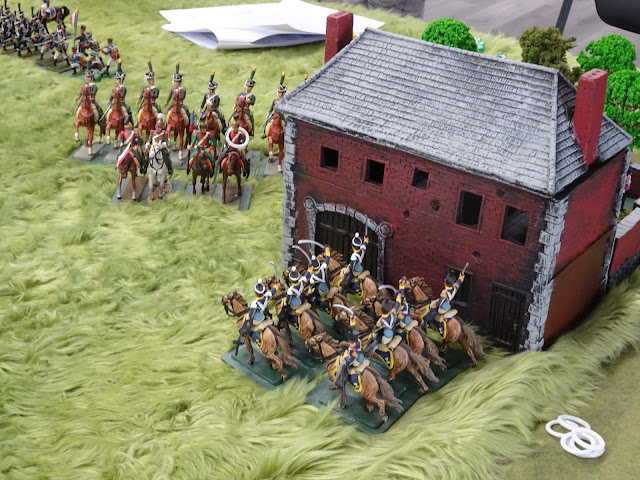 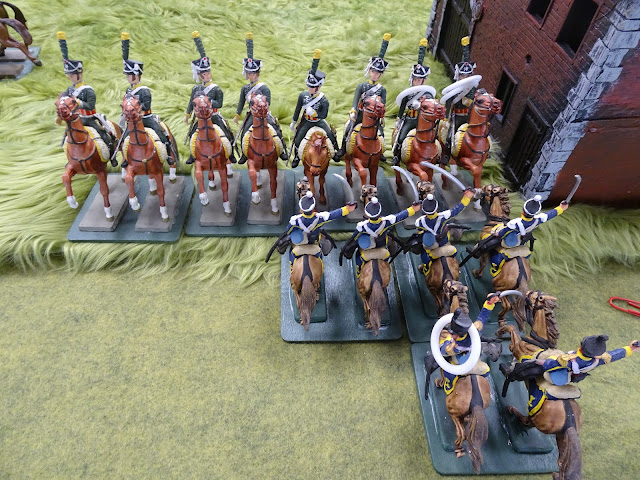 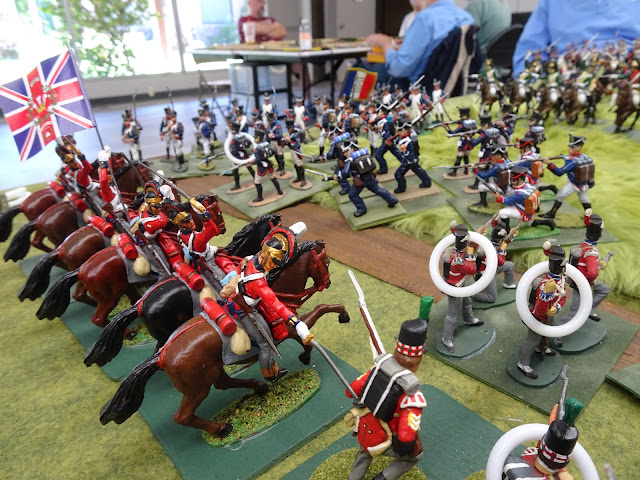 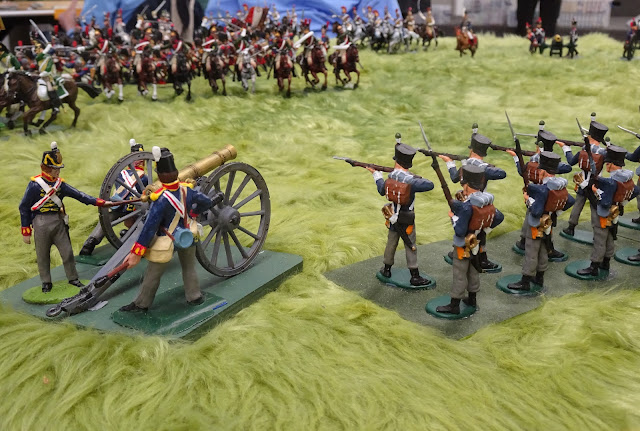