The Battle of Heraclea took place in 280 BC between a Roman Republican army  commanded  by consul Publius Valerius Laevinus, aginst the Greeks from Epirus, supported by Greek cities of the Italian peninsula : Tarentum, Thurii, Metapontum, and Heraclea.
The Greeks were commanded by the king of Epirus: Pyrrhus.
The Battle of Heraclea was battle where Greek Phalanxes and Roman legionairs faced each other, but certainly the first time Romans fought in a battle against elephants.
Historically, the battle was a victory for the Greeks with less casualties than the Romans, but they had lost many veteran soldiers that would be hard to replace on foreign soil.  The key element in the battle were the elephants, A second battle took place in Asculum  in 279 BC. With again a victory for the Greeks, but so costly for his army Pyrrhus did no longer dare to continue to Rome and returend South to face the Carthagenians in Sicily.
. 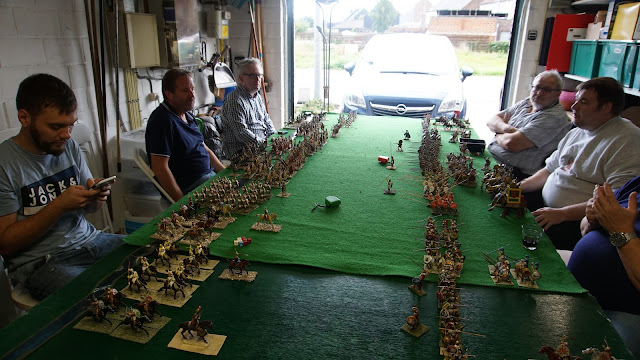 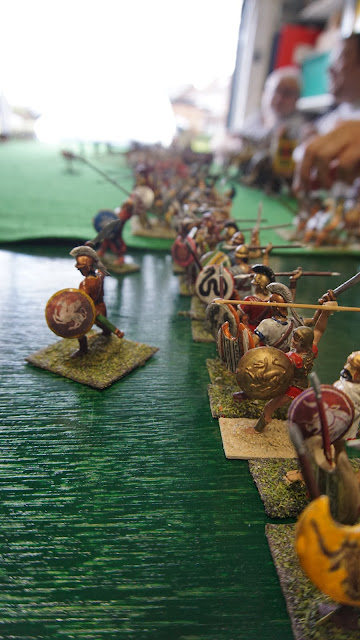 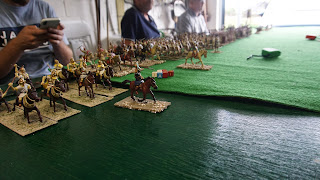 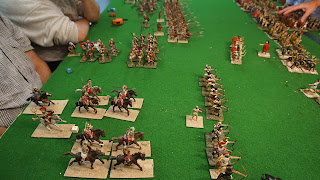 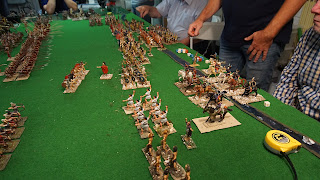 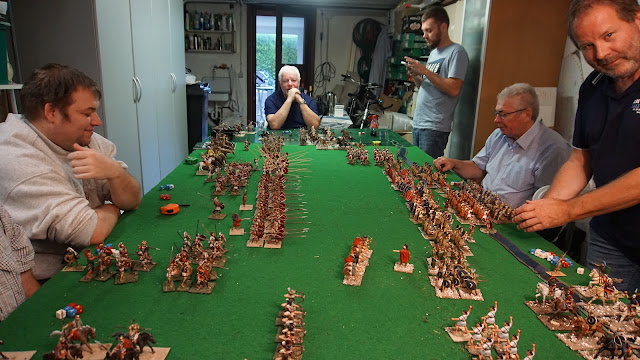 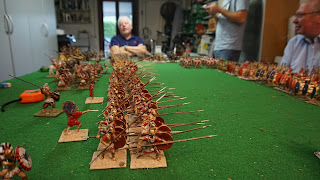 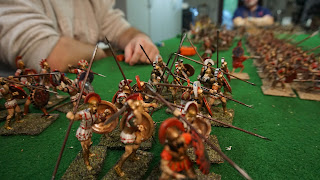 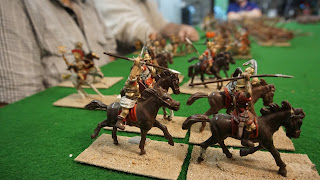 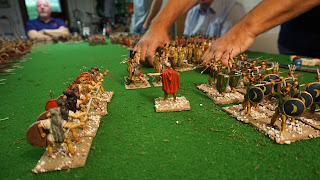 The battle started with the Greeks advancing.
On the Roman right ,the Roman and ally cavalry attacked the Greek light troops, who didn't manage to escape the attack. 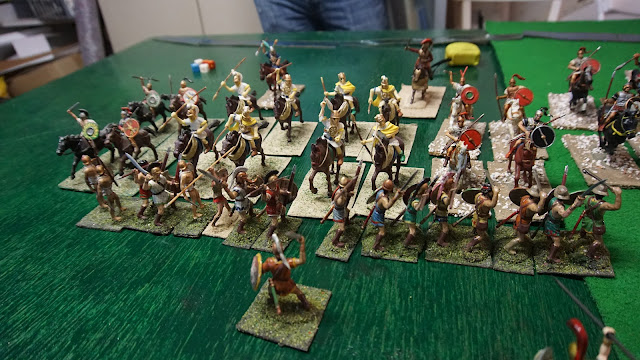 Against all odds the light troops were able to stop the advance but with great costs. In their turn, they received help from the cavalry and one unit of hoplites. 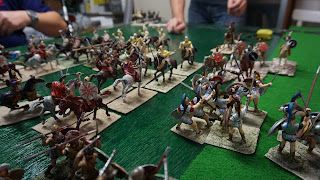 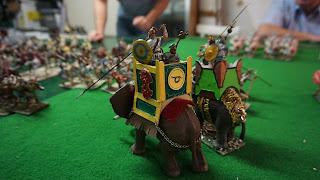 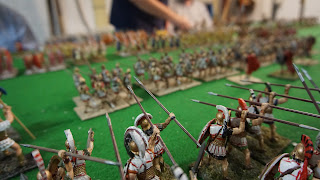 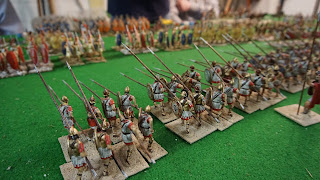 In the center,on the Roman left the heavy infantry units collided with heavy losses on both sides. 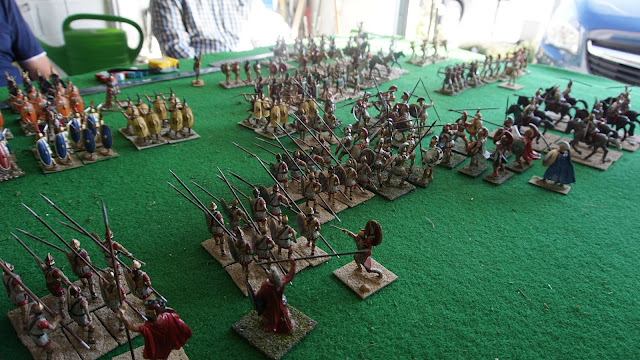 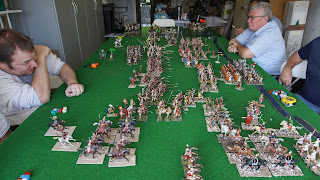 On the left flank the Romans skirmish lines first retreated behind the cavalry but later on again advanced. 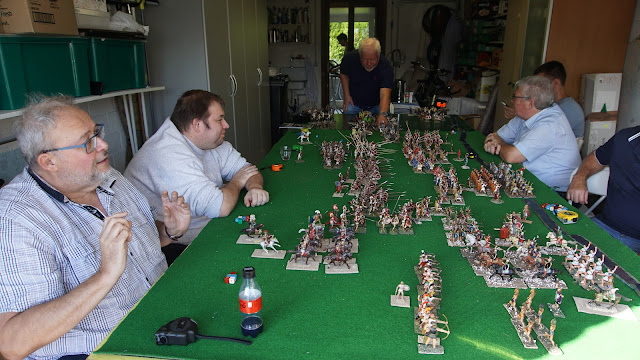 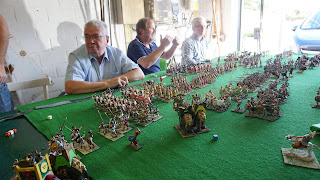 On the Greek left, the elephants were send to support the cavalry as one unit of light troops was destroyed and one fel back behind the hoplites. Also the Romans allied infantry advanced. The far most phalangist unit countered the advance successfully.  Receiving assistance from the hoplites, the Roman allied units came under pressure. A gap formed in the lines and two of the elephants were directed to it. 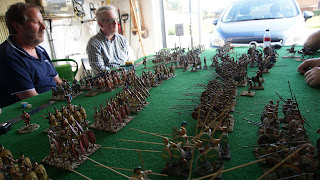 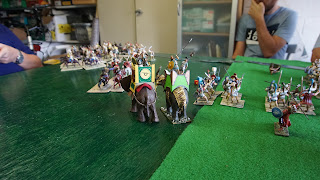 Bad dice throwing of Kristof resulted in almost all  his cavalry destroyed. His command was suddenly on breaking point. The one phalangist continued and destroyed in the end 2 enemy units but had advanced  to far and ended up surrouned by enemy units. 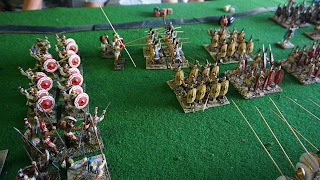 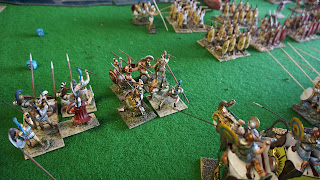 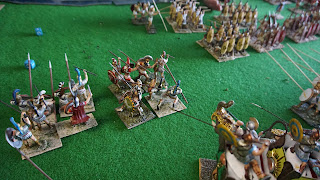 The elephants charged, but the targeted principes unit was able to stop the charge, the elephants going out of controle and started stampeding. 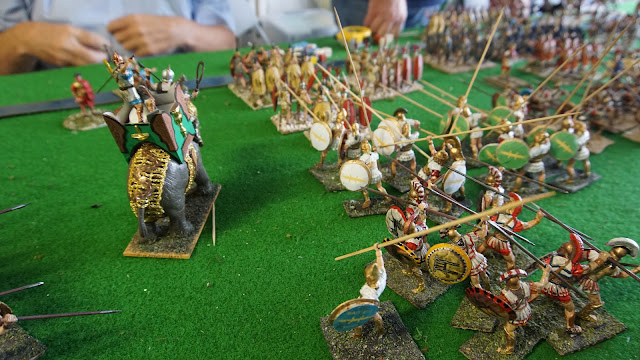 One elephant turend 180° and run continued of  table. The other kept fighting the principes, destroying them. By then, Kristof command had broken, the remaining Greek cavalry, the hoplites and 2 elephants turning the flank. The Greek center left now also came forward, Ronny's command in great peril, admitted defeat. The battle was over. 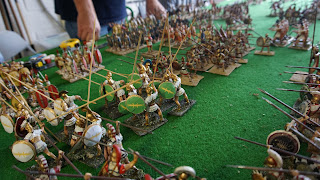 Conclusion: Kristof had not been unlucky in his dicing, but received not much assitance from the Roman center, being reluctant to advance agaist the pikes;. The Roman center had most of his units not even commited, and so, not had taken advantage of its numerical superiority. Also on the Roman left flak, fighting had been limited.
Figures From Steven(Romans, Roman Allies  and  elephants) Dirk (Greeks and part of the Roman cavalry)
Thanks to Steven, Patrick
Posted by ddonvil at 06:00