LOTR game "The battle of The Pints' Mill " 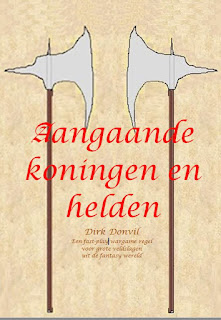 
An Evil army closed in on the village The Pints Mill. An army of the Good was waiting for them.
The Evil side: right to left
- Gaitan(a novie to the game) goblin army of 18 units light infantry except one unit with a mountain troll (medium infantry with an extra +2D in close combat), and 4 skirmish units (bowmen).
- Alwin: Haradrim army with one unit of cavalry, 3 of skirmish bowmen, 3 units of medium pikes.
Alberik: CIC with a winged Nazgul 8 units of Uruk-Hai veteran heavy infantry of which were 4 pike units, and 4 units of wargs (medium cavalry with a +1D in close combat)
Kristof: 10 units of orcs   , 7 being medium infantry and 3 heaving a battle troll being heavy infantry with a +2 in close combat).
Dirk: reinforced Easterling army: 2 medium bowmen units, 2 heavy infantry units, one heavy pike unit and one heavy cavalry unit (impact). reinforced by 3 units of orcs 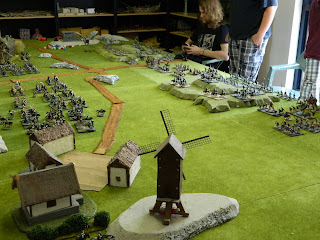 Bad command dicing and the difficult terrain made it for the Evil side to advance fast. It gave in the centre the Elves the opportunity to make their archery telling. Two war units were destroyed before even coming close to the enemy. 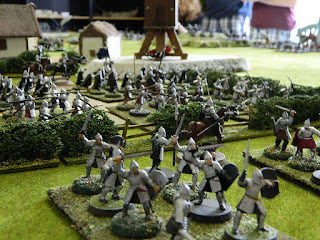 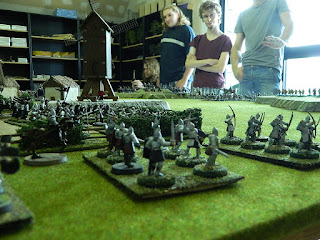 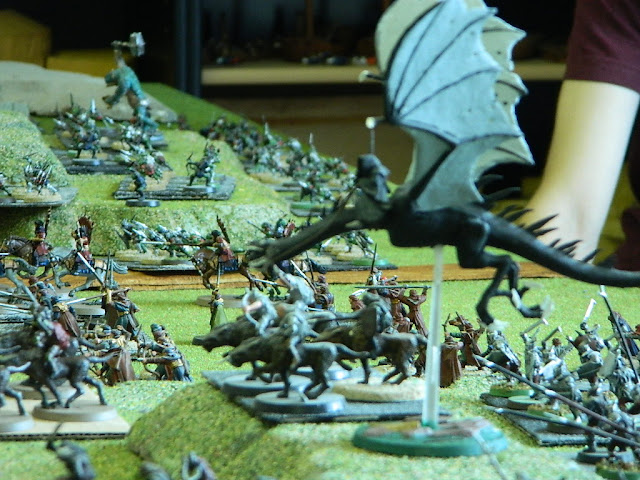 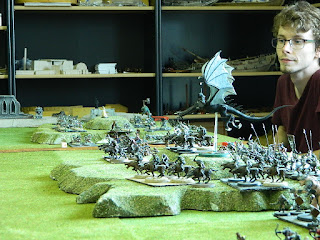 The remaining wargs were able to attack the Rohan cavalry, giving the orcs the possibility to close in.
With no room left for impact charges and attacked by the battle trolls they were decimated quickly. 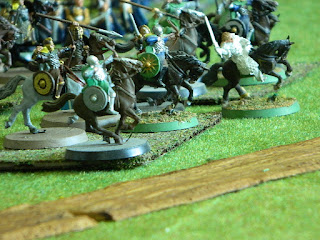 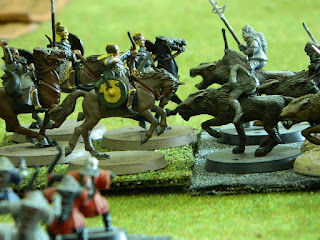 On the Evil right, the lack of experience of Gaitan with the rule , prevented him for making advantage of his numerical superiority to make a wide front. His poor quality troops were pushed of table. 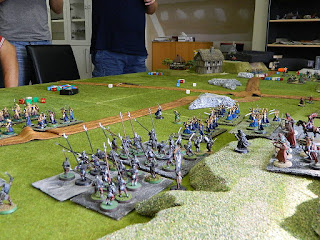 The Haradrin troops were no match for the dwarfs, who on top of that received assistance of the Elves.
The Evil right was crumbling. 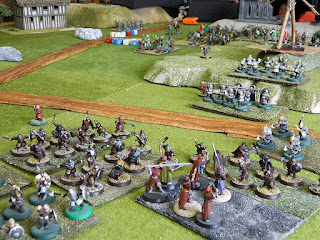 On the Evil left, I (Dirk) tried to outflank the advancing Numenorians with MY bowmen, however coming very close to the main orc medium infantry force.  I welcomed the aid of the 6 units of Kristof but lost the whole picture of the battle in this local fight.  These 6 units would have made a difference in the centre, helping the battle trolls hit the Elves hard.  The Rohan cavalry army was defeated, but the Elves were still strong enough to defeat the Uruk-hai. The dwarfs wiped out the Hardadrins, and the Ent helped to finish of the goblins. 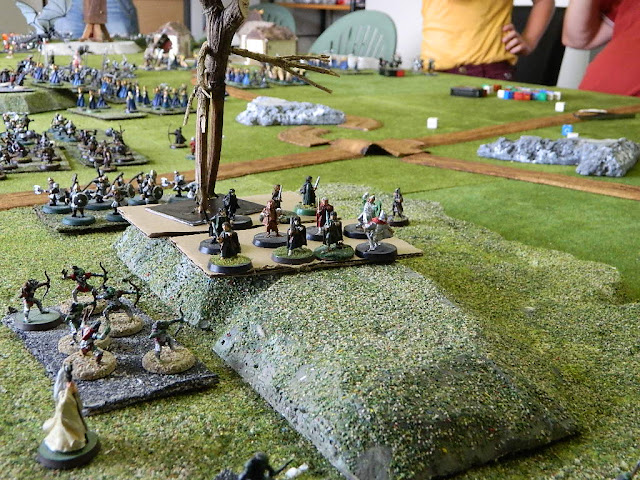 The Ent and the end 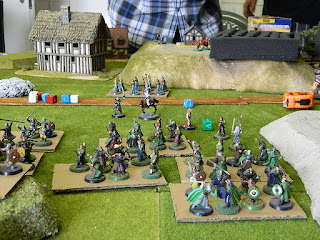 Conclusion : once the armies came a grip things evolved fast, but the higher rated armies of the Good (many veterans and elites)  made the difference. Now Gaitan has learned the game system, he will in the future know how to handle his armies, and I once more learned to keep focus on the whole picture of the battle.

Many thanks to Bart & Martine for their hospitality and catering.