Game master Patrick VDB found a nice scenario in an old magazine, and a very simple rule on the internet.
A field of squares. The game starts with 4 units af para troopers in the marsh on the right. German units on the fiedd are 2 anti tank guns and 1 have gun.
Each turn, 2 German units can enter the field they had in total 6 tanks and 10 infantry units on top of the artillery) Units can move between 4 and 6 squares depending type. The Allies had to cross minefields  or destroy them using sherman crab tanks, clearing obstacels with buldozers, bridge tanks to cross ditches, and bobbin tanks for laying carpets on soft beach sand.There were 4 of each type except for the crab tank, being 5. Also 10 infantry units apart from the para troopers.   Clearing an obstacel took one turn being in the same square. Depending on the die result, a tageted unit is destroyed or has to retreat one square.
Part of the German units had to enter the field crossing a bridge held by the para troopers. The other had to enter on a square in the centr og the base line.
Allied units can enter on whatever square of their base line. 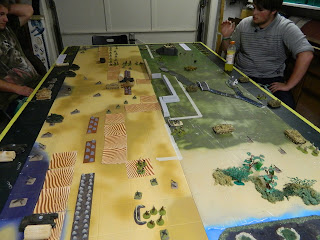 The para troopers performed very well.  No German reserves managed to cross the bridge. They even took on an anti tank position, and tanks coming from the other direction. The advance in the centre was stopped by a Stug, but on the Allied far left, the British infantry made good progress. Amost all German units were deverted that way to counter the Allied advance. 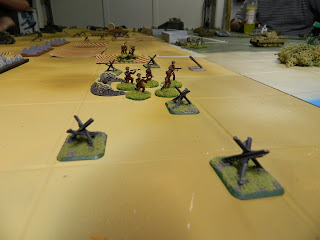 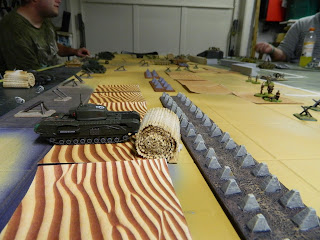 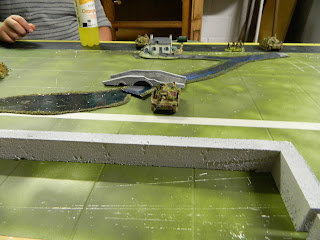 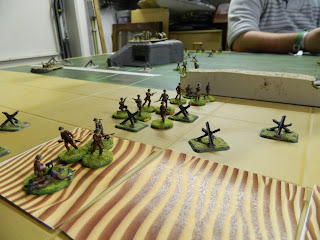 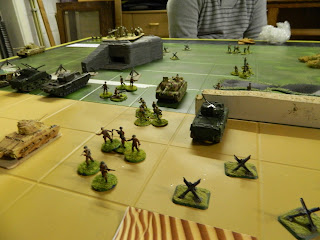 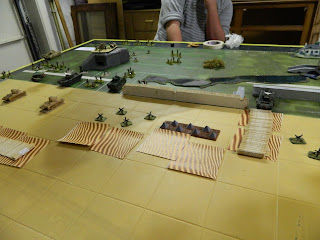 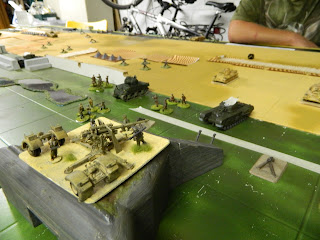 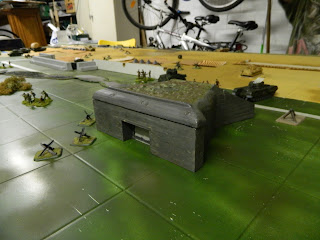 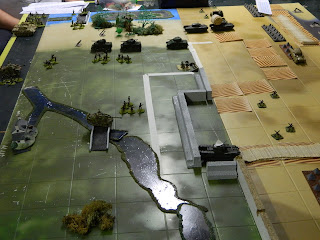 But the breacktrough came on the other side. The british infantryon the right joined  the para troopers and wiped out the armour that was send towards them. Altough, by than, 3 of the 4 para units were destroyed, the remaining unit kept in possession of the bridge, holding of the desperatly needed German reinforcements.  2 Allied armour units and 2 regular infantry reached the German base line marking the end of the game. 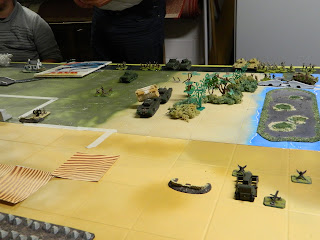 An hour and a half of fun gaming.  Thank to Patrick Jochen and Siegfried.
Dirk